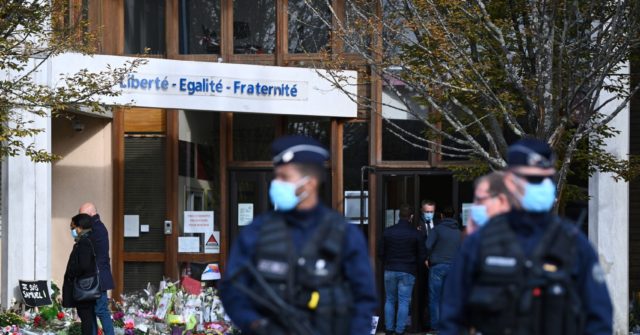 The French government has launched police raids against dozens of Islamist organisations and individuals as part of “hate crime” investigations in the wake of the beheading terror attack in Paris on Friday.

The arrests, which were in addition to the 11 taken into custody in direct connection with Friday’s murderous Islamist attack, were in response to over 80 reports of “hate crimes” in relation to the killing. France’s interior minister revealed on Monday that police operations were launched against dozens of individuals and groups who were said to have spoken out in support of Abdoullakh Anzorov, a Muslim migrant who beheaded a French school teacher in a Paris suburb.

The arrests come amid other actions against radical extremists in France. As Breitbart London reports today, the French government is also proposing the wholesale disbanding of potentially dozens of extremist organisations. Darmanin said of the plan, and why these groups posed a danger to the Republic: “It is easy to see how political Islam joins radical Islam and ultimately leads to terrorism… We must fight political Islam with the same force as terrorism.”

Friday’s attack also appears to have brought forward with more urgency other moves, including deporting 231 known illegal migrant major-risk extremists. The radicals are among a group of 851 known illegal migrants who hold a place on France’s counter-terror watchlist, and France discussed deporting them just days before the attack took place.

France’s Emmanuel Macron confirmed Friday’s beheading was an “Islamist terrorist attack” on Saturday, remarking that the attack was one that struck the nation itself. Macron said: “It’s not a coincidence if tonight a teacher was struck, because the terrorist wanted to attack the values of the public, its light, the possibility to make our children, no matter where they come from, no matter what they believe or not believe, no matter what their religion is, to make them free citizens.

“This battle is our battle and its an existential one.”

The murder of the teacher came after a campaign against him started by the parents of a child at his school, which was launched after he illustrated a civics lesson on freedom of expression with cartoons of Mohammed published by French satirical newspaper Charlie Hebdo. A Paris mosque apologised for sharing that call to action earlier this week, a short video which gave the teacher’s name and address.

The leader of the mosque said of the decision: “In hindsight, given what happened we regret having published it. We are now exploring how, in the future we can take a step back before getting carried away with things like that… Nobody, really nobody, could imagine, on October 9 when I posted it, that it would end with this killing.”

Trump Warns ‘A Nation Without Borders Is Not a Nation’ After ‘Vicious’ Beheading in France https://t.co/EiJ9hLWrNW