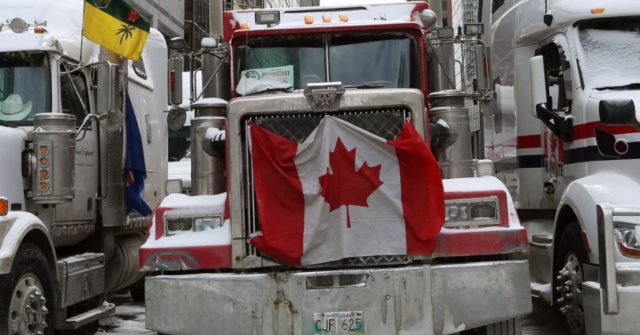 Royal Canadian Mounted Police (RCMP) have confirmed that a border crossing in the province of Manitoba has been blockaded by protestors against Wuhan coronavirus restrictions on Thursday.

Manitoba RCMP confirmed the blockade of the border crossing at the town of Emerson on Thursday morning stating, “A demonstration involving a large number of vehicles & farm equipment is blocking the Emerson Port of Entry.”

“No traffic is getting through either northbound or southbound. The Port of Entry is shut down. Please Avoid the area. RCMP is on the scene,” they added.

BREAKING: The Emerson MB/Pembina ND has been shut down until all mandates end https://t.co/oFSoJ2e1fa for more. pic.twitter.com/yRirLQm5cM

The blockade was initially set up Wednesday night according to Rebel News journalist Yank Pollak, who tweeted a video of the protestors and said their goal was to see an end to all Wuhan coronavirus vaccine mandates.

According to a report from broadcaster Global News, RCMP has engaged in some negotiations with the protestors and RCMP spokesperson Sgt. Paul Manaigre stated that the blockade is illegal under the Highway Traffic Act.

Manaigre commented on the situation to a local radio station saying, “Handing out 50 tickets doesn’t solve your problem,” and added, “We’re going to have to open up a dialogue.”

“You tow one semi, (for) which the logistics are quite extensive, then another takes its place… you’re only inflaming the situation,” he said.

The blockade is just the latest along the Canadian border with the United States in recent weeks as protests grow against Canada’s Wuhan coronavirus restrictions, vaccine passports, mandates and other policies.

In the province of Alberta, a blockade resumed in the border town of Coutts despite the Alberta government scrapping the vaccine passport programme earlier this week. The blockade has gone on for nearly two weeks and protestors have called for an end to all mandates and restrictions.

The Alberta government has also stated that it is looking into possibly charging protestors under the provincial Traffic Safety Act and the Critical Infrastructure Defence Act as well as possibly confiscating their trucks and other equipment.

“Those are pretty expensive vehicles that are on the side of the road, tractors and other equipment that could be seized and forfeited to the Crown,” Alberta’s acting Justice Minister Sonya Savage said this week.

Canadian Elites are doing everything they can to trash the Freedom Convoy movement with smears and attacks. https://t.co/qaOn5Ey0EA

A third blockade was erected earlier this week along the border in the city of Windsor, Ontario along the Ambassador bridge to Detroit, the busiest border crossing between the United States and Canada.

On Thursday, Michigan Governor Gretchen Whitmer spoke out about the ongoing protests, urging the Canadian government to reopen the bridge, stating that the delays and blockades were having an economic impact on her state.

“The blockade is having a significant impact on Michigan’s working families who are just trying to do their jobs,” Whitmer said in a statement and added, “Our communities and automotive, manufacturing, and agriculture businesses are feeling the effects. It’s hitting paychecks and production lines. That is unacceptable.”