Premier Jason Kenney of Alberta, scene of a vigorous Freedom Convoy protest at a vital border crossing with the United States, announced the end of its vaccine passports on Tuesday in a remorseful news conference that described pandemic restrictions as a source of “terrible division.”

“Now is the time to begin learning to live with [Chinese coronavirus],” Kenney said on Tuesday. “We cannot remain at a heightened state of emergency forever. We have to begin to heal.”

“The threat of Covid-19 [Chinese coronavirus] to public health no longer outweighs the hugely damaging impact of health restrictions. We are well positioned to live with this virus,” he said, citing reduced hospitalization and encouraging wastewater analysis as reasons to begin easing pandemic rules.

In truth, the number of hospitalizations in Alberta is fairly steady, as the Globe and Mail pointed out – with some implied skepticism about Kenney’s insistence that the massive Freedom Convoy protests had nothing to do with his sudden realization that pandemic restrictions have outlived their usefulness. 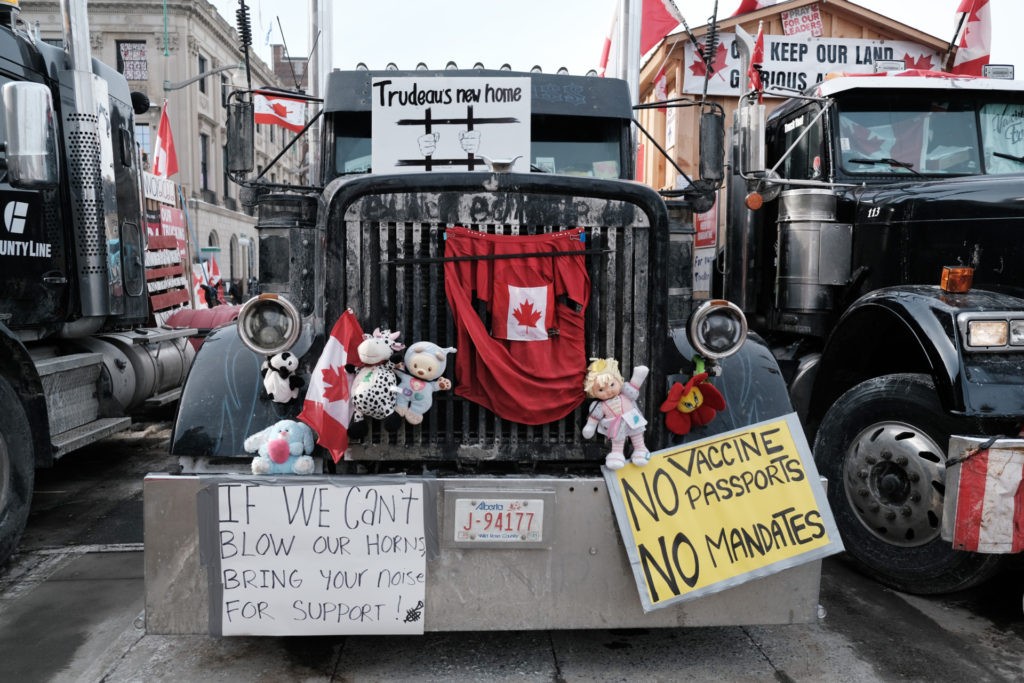 Hundreds of truck drivers and their supporters block the streets of downtown Ottawa as part of a convoy of protesters against COVID-19 mandates in Canada on February 09, 2022 in Ottawa, Ontario. (Spencer Platt/Getty Images)

“The program is no longer serving a useful and compelling purpose,” Kenney said of vaccine passports. “I could not stand in front of Albertans tonight and justify a continuation of a program that has done its job.”

“None of that has to do anything with a few trucks parked at the Coutts border crossing,” he added. 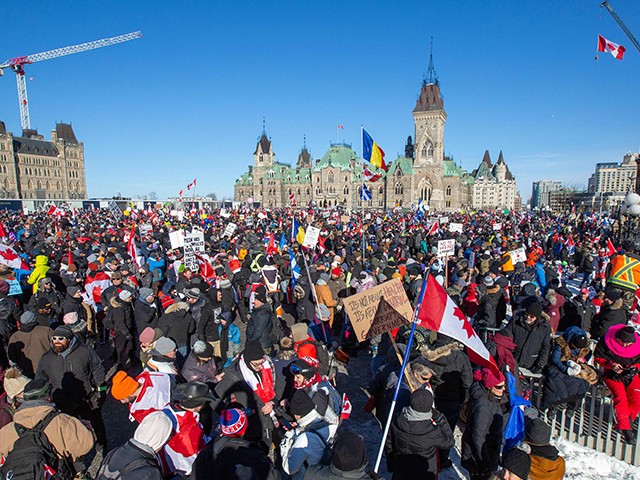 Supporters gather at Parliament Hill for the Freedom Truck Convoy in Ottawa, Canada, on January 29, 2022. (LARS HAGBERG/AFP via Getty Images)

Kenney said restrictions would be lifted in three stages, beginning with the termination of vaccine passports at midnight and the end of pandemic policies in schools, including the odious mask mandate on young children.

“It is time to let kids be kids,” Kenney said.

Saskatchewan Premier Scott Moe said his own province’s vaccine passport system would be eliminated on Valentine’s Day, while indoor masking requirements would be lifted at the end of February. 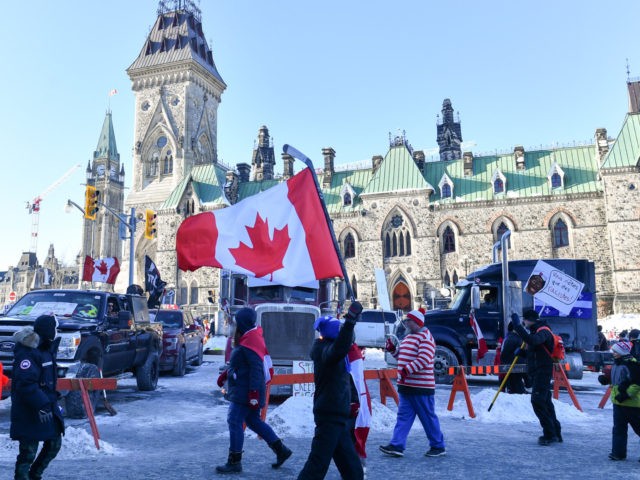 Like Kenney, Moe acknowledged the vaccine passports created “deep divisions” in society. He said enforcing the passport system was no longer worth the social cost now that the dangerous delta variant has given way to the more contagious, but less lethal, omicron variant – something that actually happened in December at the latest.

The Globe and Mail reported Moe’s declaration of eased restrictions came with a plea for social unity, although he also insisted the protest movement had nothing to do with his decision:

“It is time for us also to heal the divisions in our communities over vaccinations,” Mr. Moe said. He asked residents not to judge each other over vaccination status or turn on those who wear masks after that requirement expires at the end of February.

“Don’t lose a friend to COVID,” he said.

Mr. Moe said people from across the province influenced his government’s policy shift, but not specifically the convoys of protesters. He said his MLAs listened to constituents and their changing attitudes. “Ultimately, you blend that with the science that we have.”

Premier Dennis King announced that Prince Edward Island will begin easing its pandemic restrictions on February 17, but will not finish lifting mask requirements and limits on public gatherings until April 7. Even then, King said restrictions could remain in place indefinitely for “high-risk” facilities like hospitals and nursing homes.

“This is not a declaration that Covid is over, or that Covid will disappear, or that we are standing here saying mission accomplished. Covid is still with us and it will be with us,” King warned.

“Today is a day we cautiously look forward with hope and optimism,” he said.

Quebec Premier Francois Legault acknowledged public frustration with coronavirus restrictions and said their time was coming to an end, although he insisted they were necessary over the past two years.

“The population is fed up. I’m fed up. We’re all fed up. But the reason we resisted until today was because there was too much risk. Right now, we can take a calculated risk and finally turn the page,” he said.

Like his fellow provincial executives in Alberta, Saskatchewan, and Prince Edward Island, Legault insisted the Freedom Convoy had nothing to do with the immutable science of Chinese coronavirus changing overnight, but at least he offered his spin with a sense of humor.

“If they want to take credit and not come back in two weeks, I wouldn’t be opposed to that,” he wisecracked about Quebec City protesters, who held a demonstration last weekend and pledged to return in two weeks if conditions have not improved.

The Globe and Mail quoted communications professor David Taras of Calgary’s Mount Royal University predicting Canadian politicians would probably get away with pretending they coincidentally decided to begin lifting restrictions just as the Freedom Convoy protests peaked, because the public is weary of the endless pandemic and looking for an offramp.

“They’re not looking weak. I think the public exhaustion is now working in favor of the government,” Taras said – a prognosis that might offer a ray of hope to nervous Democrats south of the Canadian border as they, too, abruptly discover science coincidentally changed at the exact moment their poll numbers hit rock bottom.