Some members of Ottawa’s “Freedom Convoy” — which urges Canada’s government to drop pandemic-related vaccine mandates and restrictions — dismissed Canadian Prime Minister Justin Trudeau’s decision to use a federal Emergencies Act against the peaceful protest as a “scare tactic” on Wednesday, the Canadian Press reported.

“Members of the Ottawa blockade that has kept the capital at a standstill for nearly three full weeks are calling the federal government’s use of the Emergencies Act a scare tactic,” according to the news agency.

Trudeau invoked Canada’s Emergencies Act on February 14 for the first time in Canadian history to crack down on the “Freedom Convoy,” which has maintained an ongoing presence in Ottawa, Canada’s national capital. The law grants Canada’s federal government “temporary additional and necessary powers” to deal with a “national emergency.”

These powers include “the imposition of fines or imprisonment for contravening on any of the measures declared under this public order emergency.” 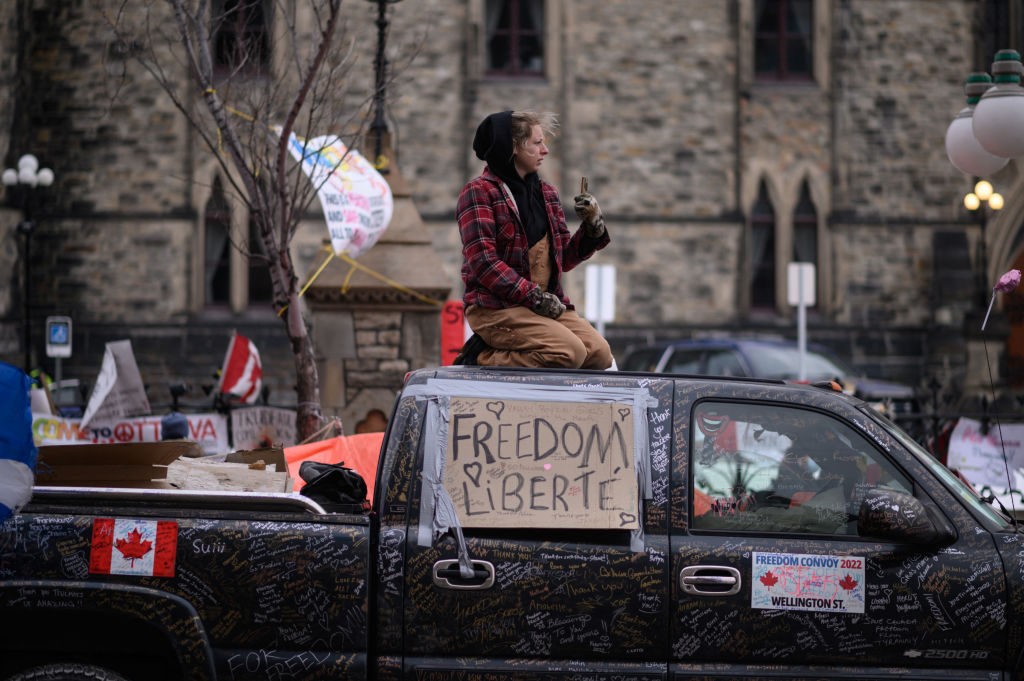 A demonstrator sits atop a vehicle during a protest by truck drivers over pandemic health rules and the Trudeau government, outside the parliament of Canada in Ottawa on February 16, 2022. (ED JONES/AFP via Getty Images) 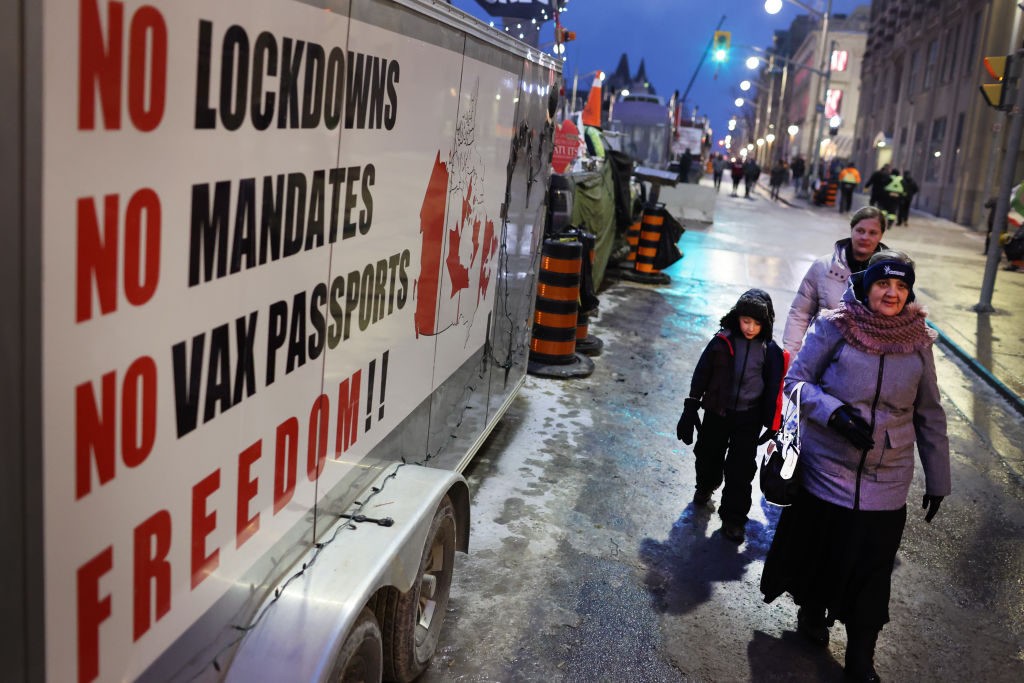 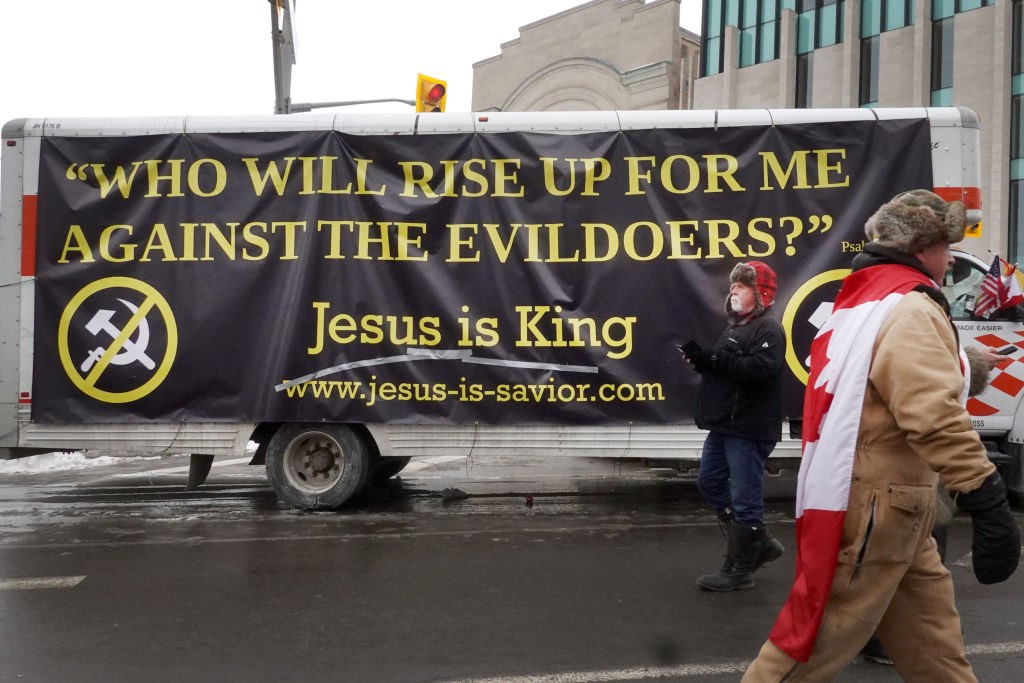 A truck participates in a blockade of a downtown street near the parliament building as a demonstration led by truck drivers protesting vaccine mandates continues on February 16, 2022 in Ottawa, Ontario. Canada Prime Minister Justin Trudeau has invoked the Emergencies Act for the first time in Canada’s history to try to put an end to the blockade which is now in it’s third week. (Scott Olson/Getty Images)

The law further allows Canada’s government to authorize or direct “specified financial institutions to render essential services to relieve the impact of blockades, including by regulating and prohibiting the use of property to fund or support the blockades.”

“Under the act, bringing children to the antigovernment blockades, participating in the protests directly, or bringing aid such as food or fuel to those involved could result in a fine of up to $5,000 or five years in prison,” according to the Canadian Press.

“Authorities in yellow ‘police liaison’ vests went from rig to rig, knocking on the doors and handing truckers leaflets informing them they could be prosecuted, lose their licenses and see their vehicles seized under Canada’s Emergencies Act,” the Associated Press (AP) reported on February 16 while documenting Ottawa’s protest. “Police also began ticketing vehicles.”

The AP said it witnessed drivers participating in Ottawa’s “Freedom Convoy” on Wednesday “rip up warnings telling them to go home.”

“If it means that I need to go to prison, if I need to be fined in order to allow freedom to be restored in this country — millions of people have given far more for their freedom,” David Paisley, who traveled to Ottawa with a truck driver friend, told the news agency.

Canada’s Justice Minister David Lametti has told Trump supporters who donated to the “Freedom Convoy” to be worried about accounts frozen. https://t.co/OLTAfZBv8G

“There was no immediate word from police on when or if they might move in to clear the hundreds of trucks by force. But protest leaders braced for action on Wednesday,” the AP observed.

The “Freedom Convoy” is a protest against policies imposed by Canada’s federal and state governments during the Chinese coronavirus pandemic — such as vaccine mandates and movement restrictions — that have violated Canadians’ civil liberties.

The demonstration started at the end of January and consists of convoys created by commercial truckers and other motorists to block trade routes across Canada and along the nation’s border with the U.S. The individual Canadian provinces of Alberta, Saskatchewan, and Ontario agreed to drop their Chinese coronavirus vaccine mandates in recent days in response to the “Freedom Convoy.”