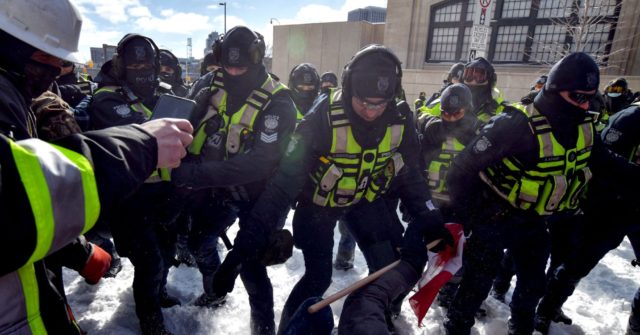 A leading organiser of the Freedom Convoy protestors in Ottawa claimed on Friday that police are surrounding protestors and conducting mass arrests, while not allowing people to leave the area peacefully.

Organiser B.J. Dichter claimed on Twitter on Friday afternoon that police forces in Ottawa were escalating the situation on the ground and not allowing protestors to peacefully leave the area.

“Ottawa police are now boxing in ‘protestors’ and executing mass arrests. Once again escalating the situation and not allowing people to leave in peace. Why are you always escalating?” Dichter wrote.

Police are starting to make arrests, many protesters who have formed a line in front of police remain @ctvottawa pic.twitter.com/eWhrTZzYo1

Breitbart News attempted to contact the Ottawa police but was unable to reach a representative to confirm or deny Dichter’s allegations or reports of mass arrests. The Ottawa police hotline advised those concerned to check the police department’s Twitter account.

Dichter had previously called on protestors to leave Ottawa earlier in the day, claiming that one of the Freedom Convoy drivers had been dragged from his vehicle at gunpoint by police.

Several videos posted on Twitter have shown police breaking into vehicles and in some cases, police have been spotted at the protest armed with rifles.

According to Ottawa Police, 21 people have been arrested as of 2:21 pm eastern standard time and 21 vehicles have been towed.

People are leaving their trucks and cars as cops coming up with some big guns at Rideau and Sussex. Cops go and search the cars after #cdnpolj #ottnews pic.twitter.com/pZc5bQGUap

The arrests come just hours after two of the main organisers of the Freedom Convoy, Tammy Lich and Chris Barber, were arrested on Thursday.

Lich had commented prior to her arrest that she was resigned at the fact that she would be arrested and noted that her bank account had been frozen.

Following the invocation of the Emergencies Act for the first time in Canadian history by leftist Prime Minister Justin Trudeau, the government announced it would be freezing the bank accounts of people linked to the protests.

Canada’s Justice Minister, David Lametti, commented on the topic of people worried their bank accounts may be frozen by the government saying, “Well, I think if you are a member of a pro-Trump movement who’s donating hundreds of thousands of dollars and millions of dollars to this kind of thing, they oughta be worried.”

Canada’s Justice Minister David Lametti has told Trump supporters who donated to the “Freedom Convoy” to be worried about accounts frozen. https://t.co/OLTAfZBv8G