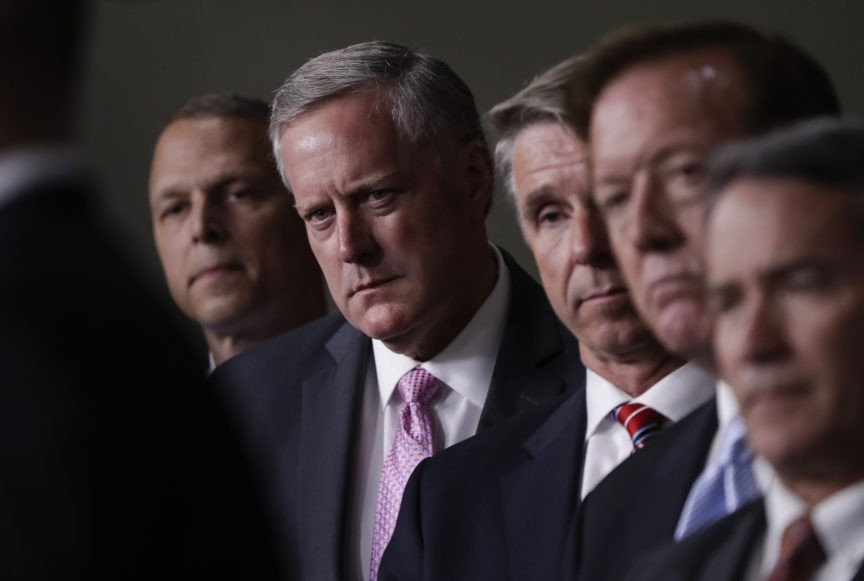 The House Freedom Caucus issued a statement late Monday calling for funding for President Donald Trump’s planned border wall along the U.S. border with Mexico in the upcoming funding bill as the group’s chairman, Rep. Mark Meadows (R-NC), remains a leading contender to become the next White House chief of staff.

“This is our last chance to address illegal immigration before Democrats take over the House,” the Freedom Caucus said as a bloc in a group statement. “Republicans in Congress must fulfill our promise to the American people by building President Trump’s wall, ending catch and release, and securing our borders.”

The group is calling for GOP leaders in Congress to include the full $5 billion that President Trump requested for wall money and for legislative fixes to “catch and release” asylum loopholes in the must-pass government funding legislation later this month.

The statement comes as Meadows, the Freedom Caucus chairman, is in consideration and a leading candidate to replace John Kelly–a retired four-star Marine general–as the next White House chief of staff. Over the weekend, President Trump confirmed that Kelly will be leaving the White House by the end of the year–and that he would be announcing his replacement soon.

When it came out that Nick Ayers, Vice President Mike Pence’s chief of staff who was seen as a leading contender for the job, would not be ascending to helm the White House staff, reports surfaced that Trump is considering Meadows for the position.

Mark Meadows is a proven conservative leader in Congress. Under his watch, the House Freedom Caucus has become one of the most-influential caucuses in the House. He would make an exceptional Chief of Staff for President Donald Trump. President Trump has accomplished a lot in his first two years in office. However, House Democrats are  looking to overturn his endeavors and sideline his administration. President Trump needs a fighter like Mark to wholeheartedly defend his policies of smaller government and economic prosperity. I appreciate serving with Representative Meadows in the House and hope I will have a chance to work with him in the administration in the near future.

In an interview on Breitbart News Sunday with Amanda House on SiriusXM 125 the Patriot Channel on Sunday evening, Gohmert endorsed Meadows for chief of staff as well.

“I think Mark would make an outstanding chief of staff,” Gohmert said.

“He’s got a great head on his shoulders and in fact, I talked to him about in July,” Gohmert added. “It remains to be seen which direction Trump will go, but other contenders for the chief of staff position reportedly include Citizens United president Dave Bossie–who served as deputy campaign manager for Trump in 2016–and U.S. trade representative Robert Lighthizer, as well as Blackstone lobbyist Wayne Berman. Acting attorney general Matthew Whitaker and Office of Management and Budget director Mick Mulvaney are also reportedly in the mix.”