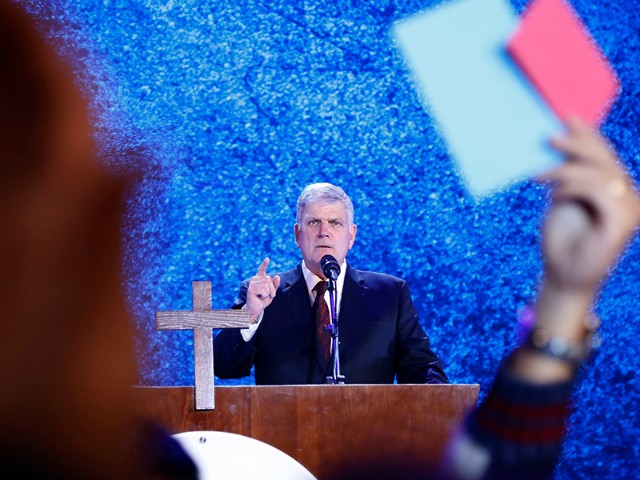 Celebrated Christian evangelist Franklin Graham has taken issue with the Democrats’ extreme push of the LGBTQ agenda, saying he will stand with biblical morality.

“I will not bow down at the altar of the LGBTQ agenda nor worship their rainbow pride flag,” Rev. Graham said in reaction to Beto O’Rourke’s promise to strip churches of their tax-exempt status if they do not recognize homosexual marriage.

“I’m going to stand with the Word of God, the Holy Bible, which is truth from cover to cover,” Graham added in a three-part tweet Friday evening.

Rev. Graham, the son of “America’s Pastor,” Billy Graham, was reacting to CNN’s “Equality in America” town hall meeting held on Thursday, which focused on LGBTQ issues with 2020 presidential candidates of the Democrat party.

Beto O’Rourke “said churches, religious organizations, universities that don’t go along w/ same-sex marriage should lose their tax-exempt status,” Graham noted. “This gives you a clue of what the progressive, socialist-leaning Dem. Party would try to force on our nation if they win any election.”

“They will create laws & ‘consequences’ that would punish those who don’t agree w/ them. This is a threat to religious freedom & free speech,” he said.

Last month, Rev. Graham came out against South Bend Mayor Pete Buttigieg for his efforts to defend abortion and homosexuality as Christian positions.

“Mayor Pete Buttigieg has been speaking openly about his support for abortion, which he says is a woman’s right to choose. That’s a crock — No one has the right to choose murder,” Rev. Graham wrote to his eight million Facebook followers in response to a Townhall article on Buttigieg’s efforts to redefine Christian morality.

During an interview with The Breakfast Club, Mayor Pete said the Bible is ambiguous about when life begins, and, thus, Christianity allows for a range of positions on abortion.

“There’s a lot of parts of the Bible which talk about how life begins with breath,” the Democrat presidential hopeful said. “And even so, that’s something that we can interpret differently.”

Mayor Pete has also insisted that Christianity has no problem with same-sex marriage, despite the numerous biblical passages that condemn homosexuality as an abomination before God and the unbroken Christian tradition that treats homosexual practice as gravely sinful.

“Mayor Pete is trying to tell people that the homosexual lifestyle is okay with God and that abortion is okay,” Graham wrote on Facebook. “His brother-in-law is right when he said, ‘This is leading people astray and it’s very, very dangerous.’”

“God defines right and wrong, not us,” Graham concludes. “As Christians, we are to live by the standards He gives us in His Word. ‘I am the Lord, and there is no other; there is no God besides Me.’ (Isaiah 45:5).”