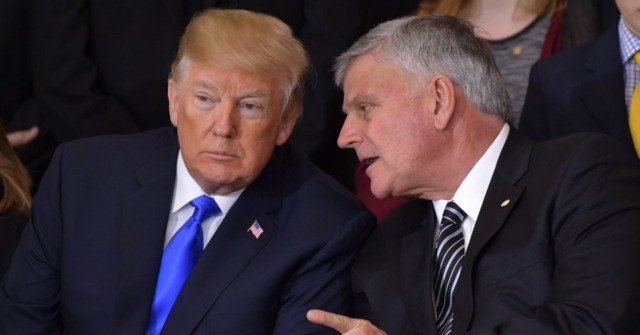 The Rev. Franklin Graham said Monday there has never before been such hatred as that of Democrats and liberal media for President Donald Trump.

Responding to comments by House Speaker Nancy Pelosi (D-CA) that Trump is “impeached for life,” the prominent evangelical leader and son of Billy Graham sent out tweets offering an explanation for the unprecedented hatred for the president shown by his enemies.

“Never before has there been such a level of hatred as we have seen for Donald Trump from the Democrats & liberal media. Why? It may be because he hasn’t bowed down to them,” Graham wrote.

This impeachment is about embarrassing @realDonaldTrump & trying to win the next election. But I believe American voters see through this never-ending charade. I pray God will strengthen @POTUS, @VP Mike Pence, & protect their families from the false accusations of the left.

In a separate tweet, Rev. Graham attributed the Democrats’ sham impeachment hearings to purely political motivations, but suggested that they have overplayed their hand.

“This impeachment is about embarrassing President Trump & trying to win the next election,” Graham said. “But I believe American voters see through this never-ending charade.”

Rev. Graham went on to offers prayers that God will “strengthen” President Trump and Vice-President Pence and “protect their families from the false accusations of the left.”