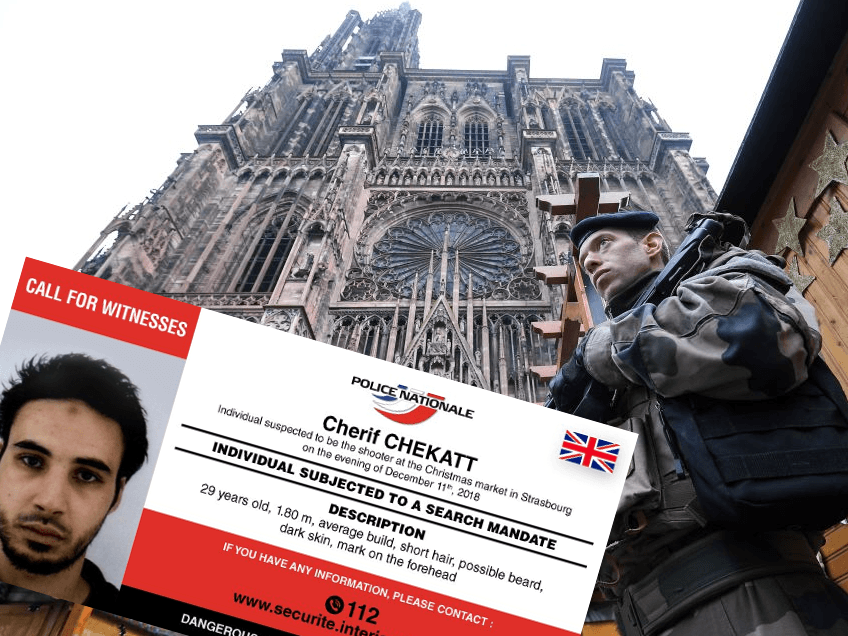 Security sources revealed Strasbourg terror suspect Cherif Chekatt received a call from a German number moments before the deadly attack on a Christmas market in France.

The sources said Chekatt, 29, had received the call just before gunning down tourists and shoppers at the world-famous Christmas market but did not answer, according to Deutsche Welle.

The call could provide authorities with clues as to his connections and to whom he may have fled if he crossed the nearby border from France into Germany.

A further revelation came from a neighbour, speaking to the Associated Press on condition of anonymity, who said she saw Chekatt, who she said was rarely at home, speaking to an unknown man in the hallway on Monday, the day before the attack.

The Strasbourg-born suspect is still on the run after the deadly shooting which took place at around 8 pm local time on Tuesday. Witnesses told authorities that he yelled “Allah hu Akbar” (“my god is greater [than your god]) as he opened fire, killing two, causing brain death in another, and injuring a further 12 — six of whom are said to be fighting for their lives in hospital.

Chekatt was shot by police, but managed to escape in a taxi-cab immediately after what authorities are treating as a terror attack.

[CALL FOR WITNESSES] Help the French police to find the suspect of #StrasbourgAttack
From abroad 📞 112 – https://t.co/K2nJHREiwZ pic.twitter.com/zKV7GC04zw

Junior German interior minister Laurent Nuñez said on Wednesday that it could not be excluded from possibility that Chekatt had already crossed into Germany and border controls between the countries have been increased, according to The Guardian.

France has increased its security index to its highest level with Prime Minister Edouard Philippe confirming there would be an increased presence of SWAT, police, and troops to guard public places, especially Christmas markets.

The terror suspect was already well-known to police by the age of 10 and had his first conviction by 13.

Ratcheting up 27 convictions across France, Germany, and Switzerland, Chekatt was said to have been radicalised in prison with his police file photograph showing a bearded man bearing a ‘prayer bruise‘ on the centre of his forehead.

Due to the European Union’s free movement rules, whereby the citizen of one EU country can travel without restriction to another — an agreement non-member Switzerland is also signed up to — Chekatt was able to commit crimes in the different countries. He was jailed in Germany in 2016 for aggravated robbery and deported to France the following year, being “banned from reentering Germany at the same time,” a security source told Reuters.

Paris Prosecutor Remy Heitz has suggested the Christmas market was chosen for its religious symbolism, according to Reuters.

Last week, Breitbart London reported that the UK’s government issued travel warnings to a dozen EU countries over the Christmas period, warning specifically to be vigilant in Christmas markets, including in France and Germany.

Thanks to the borderless EU, Amri was able to travel all the way to Italy before being shot dead by two police officers who recognised him during a random stop.

It took European authorities four months to apprehend Salah Abdesalam, the lone surviving suspect from the multiple November 2015 attacks in Paris, tracking him down eventually in Molenbeek, Brussels — a known Islamic terrorist hot spot in the Belgian capital.