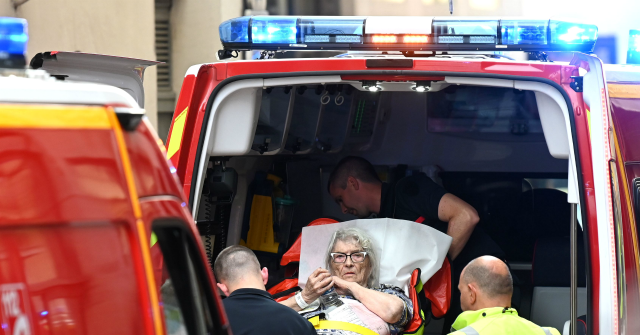 (AFP) — French police were pulling out all the stops on Saturday to locate a suspect following a blast in the heart of Lyon that wounded 13 people.

“All means have been activated to identify and detain the person who committed this act,” Paris prosecutor Remy Heitz told media in Lyon, France’s third-biggest city.

The police circulated the suspect’s photo on Twitter with two new images late Saturday showing a man wearing a green T-shirt, Bermuda shorts and a carrying a dark rucksack cycling.

They urged witnesses to call on an emergency number if they had any information.

The man appears to be in his thirties and police said they had received “several dozen” calls linked to the blast on Friday evening.

Heitz said 90 investigators and 30 police technical experts were working on the case.

The blast occurred two days ahead of hotly contested European Parliament elections and while France remains on edge owing to terrorist attacks which have rocked the country.

Heitz has taken charge of the investigation into “attempted murder in relation with a terrorist enterprise and association with terrorist criminals”.

French Justice Minister Nicole Belloubet said however that it was too soon to say whether the blast could be termed a “terrorist act”.

Sources close to the investigation suspected the explosive was acetone peroxide, or APEX, a volatile compound used in the deadly Paris attacks on November 13, 2015.

They added that traces of DNA had been recovered from the rucksack that held the explosive but cautioned that it did not necessarily belong to the suspect. The DNA sample did not match any listed in France’s national DNA index (Fichier national des empreintes génétiques, or FNAEG), said a source close to the investigation, confirming information published in the Lyon-based newspaper Le progrès.

President Emmanuel Macron initially called the Friday evening explosion an “attack” but later took a more cautious tone with a tweet that condemned “the violence that has struck” the city’s residents.

The number of wounded stood at 13 eight women, four men and a 10-year-old girl of which 11 needed hospital treatment.

None of their injuries were life-threatening, although Heitz said some would have to undergo surgical intervention to remove shrapnel.

No one has claimed the attack, Heitz noted.

He said investigators had recovered small screws, ball bearings and batteries along with a printed circuit and a remote-controlled trigger device, as well as pieces of white plastic that might have been part of the explosive device.

It was placed in front of a bakery near the corner of two crowded pedestrian streets in the historic centre of the city at around 17:30 (1530 GMT) on Friday.

Lyon and its extensive suburbs are home to 2.3 million people.

‘Too small to kill’

District mayor Denis Broliquier said “the charge was too small to kill,” and an administrative source told AFP it was a “relatively weak explosive charge”.

“There was an explosion and I thought it was a car crash,” said Eva, a 17-year-old student who was about 15 metres (50 feet) from the blast site.

“There were bits of electric wire near me, and batteries and bits of cardboard and plastic. The windows were blown out,” he said.

“I was working, serving customers, and all of a sudden there was a huge ‘boom’,” said Omar Ghezza, a baker who works nearby.

“We thought it had something to do with renovation work,” he said.

France has been on high alert owing to a wave of deadly jihadist terror attacks since 2015 that have killed more than 250 people.

The latest was in December, when five people were killed and 11 wounded during a Christmas market attack in Strasbourg, eastern France.

The last package bomb in France dates back to December 2007, when a blast in front of a Paris law office killed one person and injured another. Police never determined who carried out that attack.