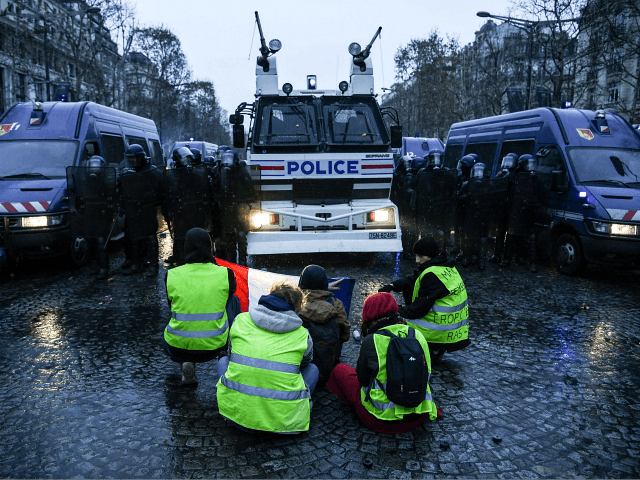 PARIS (AP) – The Latest on France protests (all times local):

French police have pushed protesters off the Champs-Elysees in Paris with tear gas and water cannon, and re-opened the French capital’s famed avenue to traffic.

Police were telling protesters to remove their yellow vests, symbols of a nationwide protest movement that began in November against economic injustice and France’s high cost of living.

It was the fifth Saturday of protests in the French capital but there were many fewer protesters than in previous weeks. Police said up to 3,000 protesters were in the streets of Paris in the afternoon, compared to 10,000 a week ago, when protests degenerated into violence and looting for the second week in a row.

The French press quoted authorities as saying that 33,500 protesters turned out nationwide Saturday, less than half the number of the previous week.

French police have fired tear gas across the Champs-Elysees Avenue in Paris and protesters have scuffled with police outside the city’s Opera house amid the fifth straight weekend of protests by the “yellow vests” movement.

Saturday saw mostly peaceful anti-government protests in the French capital but violence broke out at its margins, as groups of yellow vests tried to break through police lines as they protested France’s high cost of living.

There were clashes at Opera, where some demonstrators had gathered to voice their grievances. And French police unleashed repeated discharges of tear gas along Paris’ premier shopping street, the Champs-Elysees, although the back-and-forth fell short of previous violence that had scarred the avenue with broken windows and looted stores.

French police have detained 85 people in Paris in Saturday’s protests.

Belgian police say a man has died after he crashed his car into a truck at a protesters’ roadblock on the Franco-Belgian border.

The accident brings to seven the number of protest-related deaths since a wave of anti-government yellow vest demonstrations began sweeping France more than a month ago.

Jonathan Pfund, a press officer at Belgium’s Federal Police, said the crash happened Saturday when a driver hit one of the trucks that had been stalled at the roadblock.

In the French capital on Saturday, police say 85 people have been detained on the fifth straight weekend of protests by the yellow vests movement, which is protesting the high cost of living.

Paris police say 85 people have been detained in Paris on the fifth straight weekend of protests by the “yellow vests” movement, where thousands of people converged in the French capital.

Police say of those detained, 46 people have been arrested. No details have been given about why they were taken into custody.

Limited scuffles broke out between protesters and police on the sidelines of largely peaceful demonstrations near the city’s Champs-Elysees boulevard, with riot police firing small amounts of tear gas to disperse groups of protesters heading down the side streets off the main avenue.

About 8,000 police and 14 armored vehicles were deployed in Paris for the demonstration, after similar protests in recent weekends turned violent, with protesters smashing and looting stores and setting up burning barricades in the streets.

More scuffles have broken out in central Paris among “yellow vest” protesters and police, who fired tear gas to disperse a crowd trying to make their way through police lines.

The clashes broke out in a side street near the capital’s famed Champs-Elysees boulevard Saturday morning, as groups of protesters headed off the main avenue into smaller nearby roads, some of them with traffic still flowing. Riot police blocked off access to some streets, attempting to keep the protests in specific areas.

Saturday marks the fifth straight weekend of demonstrations by the “yellow vest” movement, which takes its name from the fluorescent safety vests French motorists carry in their vehicles. It emerged mid-November as a protest against fuel tax increases and morphed into an expression of rage against the government

A minor scuffle has broken out between protesters and police in Paris during demonstrations by the “yellow vest” movement, with police briefly using pepper spray to disperse a crowd.

The scuffle broke out on the Champs-Elysees boulevard in the French capital late Saturday morning. Thousands of people were gathering on the wide boulevard amid a heavy police presence after previous protests turned violent. The scuffle was quickly over, and protesters began marching toward the landmark Arc de Triomphe at the end of the avenue.

Saturday marks the fifth straight weekend of demonstrations by the “yellow vest” movement, which takes its name from the fluorescent safety vests French motorists carry in their vehicles. It emerged in mid-November as a protest against fuel tax increases and morphed into an expression of rage against the government.