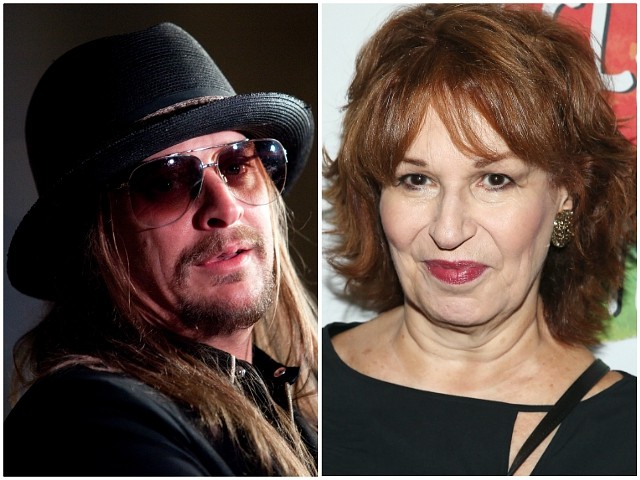 Detroit crooner Kid Rock went after ABC’s Joy Behar in no uncertain terms calling her a “bitch” on live TV on Fox & Friends Friday, forcing the network to apologize multiple times for his comments.

During Friday’s broadcast, Host Steve Doocy noted that as Americans we should be able to discuss things “without going for each other’s throats and protesting everything.”

But Kid Rock had a slightly diverging opinion and jumped in to decry political correctness saying, “God forbid you say something a little bit wrong you’re racist, homophobic, Islamophobic… people need to calm down, a get a little less politically correct, and, I would say love everybody. Except I’d say screw that Joy Behar bitch, everybody but that.”

“You cannot say that,” Doocy quickly responded. “We apologize for that,” he added.

Doocy pressed on, though, noting that Behar merely has a divergent opinion from Rock’s.

But Rock noted that he was just being flippant.

“Exactly,” Rock said in response, “maybe we’ll go hash it out with her and talk about it. Aside from joking, which I was, it’s just about being to hash it out with people and have your thoughts and ideas but be able to still go and have a beer with somebody and just say hey you know we love this country, you know let’s have different ideas but try to move forward and be more together and realize at the end of the day we’re all Americans.”

But back in the studio, Fox host Ainsley Earhardt also apologized to viewers for airing Rock’s attack. “We do need to apologize. We don’t feel that way about Joy Behar,” she said when the cameras came back on in the Fox studio.

For her part, Behar later slammed Rock saying that when he “comes after one of us, he comes after all of us” on her ABC show, The View.