Four Senate Republicans bailed out Senate Majority Leader Chuck Schumer (D-NY) on Monday by voting to advance the nomination of Dr. Robert Califf as the head of the Food and Drug Administration (FDA).

The Senate voted to invoke cloture, or limit debate, to advance the confirmation of the head of the FDA for a second time.

Califf’s nomination was controversial enough for many Democrats that Senate Democrats across the political spectrum voted against Califf, including Sens. Joe Manchin (D-WV), Maggie Hassan (D-NH), and Ed Markey (D-MA).

Manchin said, regarding Califf, “That man is horrible.”

Sen. Mike Braun (R-IN) and Manchin wrote an op-ed Monday, urging Biden to withdraw Califf’s nomination to lead the FDA. They said Califf has failed to address the opioid crisis and has strong ties to the pharmaceutical industry. 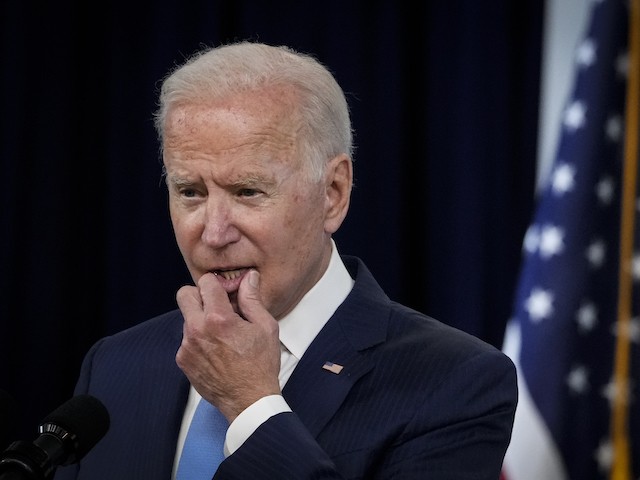 U.S. President Joe Biden speaks about COVID-19 vaccines in the South Court Auditorium at the White House complex on August 23, 2021, in Washington, DC. On Monday morning, the U.S. Food and Drug Administration (FDA) announced full approval of the Pfizer-BioNTech coronavirus vaccine for people 16 and older. (Photo by Drew Angerer/Getty Images)

Braun and Manchin argued that it makes “absolutely no sense to install a candidate who has already led the FDA in its most senior position but failed to address this crisis in any meaningful way.”

“We need new, dedicated leadership that understands the gravity of the drug epidemic and will fight back against the greed of the pharmaceutical industry,” Braun and Manchin wrote.

The two senators wrote of his “poor record on opioids”:

The current FDA commissioner nominee, Dr. Robert Califf, has significant ties to the pharmaceutical industry, and his leadership of the FDA would take us backward, not forward. His nomination is an insult to the many families and individuals who have had their lives changed forever as a result of addiction.

During Dr. Califf’s previous tenure as FDA commissioner, drug-related overdoses went up, a clear indicator the FDA hadn’t made any necessary, meaningful changes to address the crisis facing our country. In 2016, then-Commissioner Califf announced the FDA’s plan to overhaul its opioid policies.

But between 2016 and 2017, the FDA approved five new opioids and only removed a single opioid from the market. Dr. Califf also commissioned a report on opioids, but the report failed to review the flawed enriched enrollment randomized withdrawal (EERW) methodology used to approve new opioids.

“We need an FDA commissioner who is suited to handle the public health challenges our entire country is facing. That is not Dr. Califf,” the two wrote.