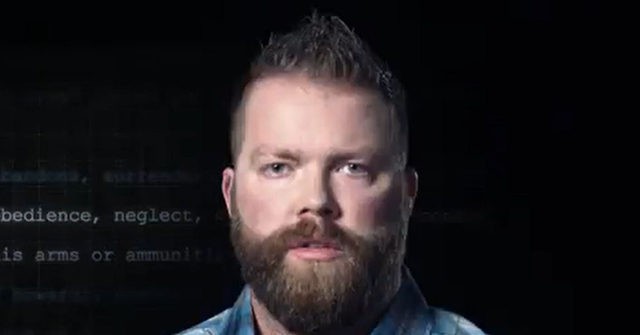 The ad discusses the Uniform Code of Military Justice (UCMJ), which Cunningham — an Army Reserve lieutenant colonel — may have violated through an extramarital affair with Arlene Guzman Todd, wife of disabled combat veteran Jeremy Todd.

A transcript of the ad read:

The Code of Military Justice. All soldiers live by it. Just like the oath we all take. It’s how soldiers know we can trust each other in combat. It’s life and death.

Cal Cunningham violated his oath when he had an affair with another soldier’s wife. That’s why the Army is investigating Cal Cunningham.

It is against the UCMJ to engage in an extramarital affair, and such activity with another soldier’s wife draws a great deal more scrutiny.

The National File and the Associated Press revealed earlier this month that Cunningham, a married father of two, had an affair with Guzman Todd, 36, as recently as July.

The Army Reserve is investigating the matter, as Cunningham may have violated the UCMJ with the affair. Legal experts say that Cunningham could be punished if he were on duty at the time of the affair.

Cunningham serves as a military judge advocate with the 134th Legal Operations Detachment at Fort Bragg, North Carolina. Guzman Todd’s husband served for six years at Fort Bragg, between 2010 and 2016.

Todd, who injured his spine during a paratrooper proficiency jump at Fort Bragg, called for Cunningham to drop out of the race.

“If elected, I can only imagine how misplaced his judgment would be for the people he’s charged to represent,” Todd said in a statement to the News & Observer. “I firmly believe Mr. Cunningham should drop out of the Senate race and ask that his behavior and actions be reviewed under the Uniform Code of Military Justice.”

It is not clear when Cunningham met the Todds, before they moved to Southern California in 2016.

At least one text message between Cunningham and Guzman Todd indicated they knew each other for a while. Earlier this year, Cunningham wished Guzman Todd’s eight year old Happy Birthday, noting, “He was so little when we met!”

Tillis’s campaign manager Luke Blanchat called Cunningham a hypocrite for making his military career a big part of his run.

“Cal Cunningham and his liberal benefactor [Senate Minority Leader] Chuck Schumer [D-NY] spent millions of dollars trying to portray Cunningham as a man of his word who will protect North Carolina military families, but that version of Cal Cunningham was one big lie,” Blanchat said in a statement.

“The real Cal Cunningham is a hypocrite who disgraced his family, the Army, and the people of North Carolina. Voters now know that they cannot trust Cal Cunningham and they will reject him on November 3rd.”