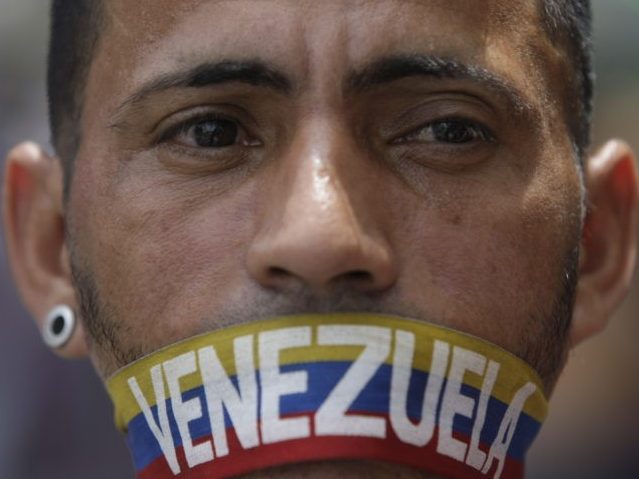 Venezuelan student leader Lorent Saleh spent four years behind bars for peaceful resistance to the socialist regime of Nicolás Maduro. Released this month, he offered several interviews this week from his new home in Spain, describing in gruesome detail the wide variety of torture methods he experienced and saw in use during his imprisonment.

Saleh, a student opposition leader, was arrested in a wave of protests by peaceful anti-socialists in 2014 when he was 26. He spent four years in prison without a conviction, never having stood before a judge. His mother, Yamile, recently explained to media that Saleh was accused first of a crime for holding a sign reading “Chávez lies” in 2010 and, four years later, was arrested on charges of having brought Colombians into the country to protest Maduro.

Then-Colombian President Juan Manuel Santos extradited him, leading to four years of what he describes as gruesome torture that led him to attempt suicide four times.

The Venezuelan government freed Saleh to Spain this month after the abrupt death of local Caracas politician Fernando Albán in police custody. Officials have provided conflicting explanations for his death, all alleged suicides. The Venezuelan opposition has rejected this explanation and demanded an investigation.

Speaking to Colombia’s NTN24 on Monday night, Saleh described the hopelessness of believing he would die in prison.

“I was prepared for everything except freedom,” he said. “I had assumed I would be in prison until either the government fell or they killed me … since I wasn’t a member of a political party, nobody was fighting for my freedom. It was horrible.”

Saleh offered a far more extensive interview to the Spanish newspaper El Mundo, published Sunday, in which he explained various forms of torture in detail. He noted that the torture centers in the underground Caracas prison known as “The Tomb” were significantly different than those at the Helicoide, the capital’s mall-turned-political-prison.

“I saw men on their knees so they could be beaten. And the worst – the most terrible and striking – I saw men not do anything before the suffering of other men,” he explained. “I have seen prisoners hanging for three days on a rail. Crucified. And other prisoners pass him by, as if nothing.”

“I have seen prisoners offer to abuse other prisoners, thinking that they would thus avoid being abused themselves, and of course that didn’t happen. They were abused too, and even moreso,” Saleh continued. “Because nobody, not even the guards, trusted them.”

“Some get used to beating, submitting [prisoners to their will], torturing, but the worst is that others get used to being beaten, submitted, tortured,” he concluded.

The Helicoide was where the Maduro regime imprisoned Joshua Holt, a U.S. citizen accused of allegedly hoarding firearms to start an uprising on the orders of the U.S. government. In May, Holt and Saleh joined a protest within the prison demanding an end to the beatings in light of a particularly bloody attack on one of their fellow inmates, allegedly in part triggered by overcrowding. The Venezuelan regime does not keep political prisoners separate from common criminals, who often complain they are treated worse than the dissidents.

The protest succeeded in bringing enough awareness to move some of the prisoners out of the Helicoide. Maduro also agreed to release Holt. This month, Holt celebrated a long-awaited wedding in the Mormon church to wife Thamara Caleño, who was also held in the Helicoide.

Unlike the Helicoide – which Saleh described as dingy and fueled by thug-like violence – the “Tomb” prison, he told El Mundo, was a sophisticated, high-tech “torture chamber.”

“It is five floors below ground level in a building in central Caracas, the headquarters of the Bolivarian Intelligence Agency. It is a laboratory created for the application of very particular tortures – a sophisticated, modern place,” Saleh explained, describing the infrastructure as foreign and “Ruso-Cuban, not Venezuelan.”

“Venezuelans break ribs. They don’t draw blood out of you before interrogations to weaken you. They don’t expose you to white torture,” he explained.

Saleh described “white torture” as a method in which guards forced prisoners into seemingly comfortable positions – one arm aloft, or both hands behind their back, for example – for 12 or 24 hours, or up to a week. The “white” comes from the intense artificial light shone on the prisoners’ faces during the torture. Guards sometimes added to the torture a splash of water on their bodies and electric shocks.

Another form of torture, Saleh detailed, involved “annulling, one by one, the prisoner’s every sense until he doesn’t know if he is alive or dead.” Unlike white torture, this form involved darkness and absence of sound. “You know the only way to figure out [if you are alive]? Pain. That is why you want them to beat you and you beat yourself. Against the floor … against whatever, looking for blood.”

Saleh said the torture was intended to get him to “confess” that the United States government, along with a variety of Venezuelan dissidents, had recruited him to overthrow the government, a claim he calls “delusional.”