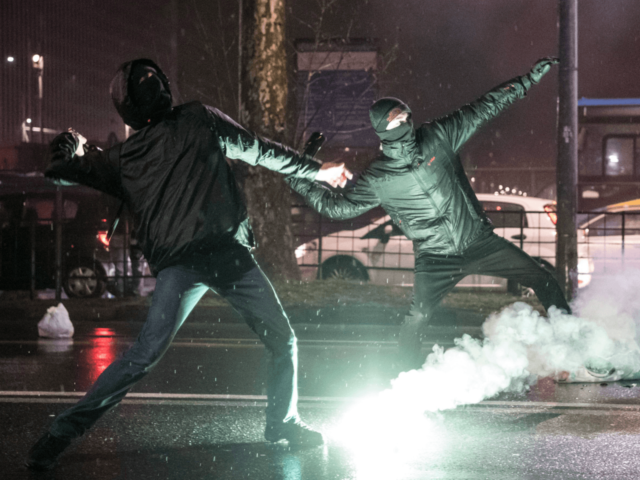 “This is an extremely violent group that goes out, threatens, intimidates, attacks with extreme violence for political reasons,” Kerik said during an interview Wednesday.

Kerik added that he was “appalled” that the Portland Police Department failed to be more “active, preemptive and reactive,” adding that during his time under former New York City Mayor Rudy Giuliani, the police knew when a protest was being planned and were ready to act.

“I can tell you under Rudy Giuliani back when I was police commissioner, this would be absolutely all hands on deck to make sure this didn’t happen,” Kerik noted.

Video footage shows the assault of journalist Andy Ngo carried out by Antifa on Saturday. Breitbart News reported that masked individuals punched and kicked Ngo, then threw containers of liquid at him as he walked away from the scene. Ngo live-streamed a video of himself talking to Portland police after the assault. The journalist’s face is scratched and blood can be seen on his neck.

“I just got beat up by the crowd, with no police at all, in the middle of the street,” Ngo is heard saying in the video. “Where the hell were all of you,” he asks police.

“We cannot allow people to continue to use the guise of free speech to commit a crime. A lot of people are emboldened because they know they can’t be identified,” she told reporters.

Portland Mayor and police commissioner Ted Wheeler came under fire for remaining silent about the protest and the assault on Ngo after Saturday’s events.

However, Wheeler broke his silence Monday by issuing a series of tweets calling Portland “a beacon of free speech” and adding that “we stand against all forms of violence – regardless of someone’s political leanings.”

“You know what would benefit American cities? Not allowing a domestic terrorist group, Antifa, free reign to attack Americans. How do you sleep at night knowing you let this happen?” Presler wrote.