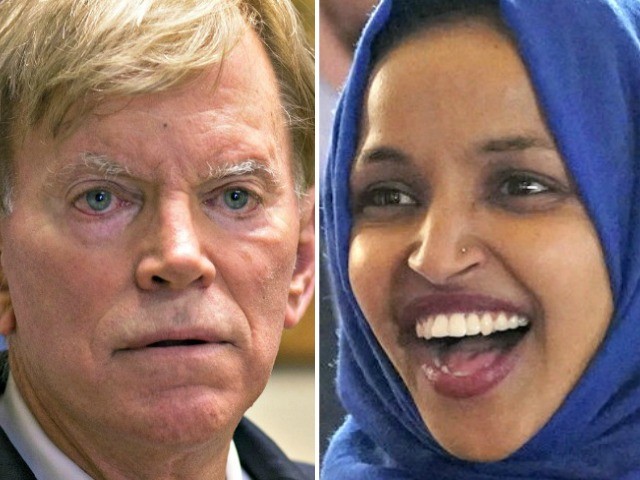 Former KKK leader David Duke backed Rep. Ilhan Omar (D-MN)’s antisemitic statement Sunday that the U.S. Congress supports Israel because its members had been paid to do so.

He tweeted on Monday:

So, let us get this straight. It is “Anti-Semitism” to point out that the most powerful political moneybags in American politics are Zionists who put another nation’s interest (israel’s) over that of America ??????

So, let us get this straight. It is “Anti-Semitism” to point out that the most powerful political moneybags in American politics are Zionists who put another nation’s interest (israel’s) over that of America ?????? https://t.co/2e1QbIxOGp

Every Zio and every Goy knows that Zionist $ rules American politics. 9 ot10 top Demo funders, biggest corp. cont. Goldman Sachs, Repub giant $bags – S. Adelson. It’s a disgrace that not one white christian man in Congress has the balls to stand up to them.! pic.twitter.com/4DOWdHs4Ng

It’s all about the Benjamins baby 🎶 https://t.co/KatcXJnZLV

In 2012, Omar tweeted: “Israel has hypnotized the world.”

Israel has hypnotized the world, may Allah awaken the people and help them see the evil doings of Israel. #Gaza #Palestine #Israel

Duke regularly frames American politics — particularly its foreign policy towards Israel and the broader Middle East and North Africa — as procured by Jewish interests at the expense of America’s national interest.

Tulsi Gabbard is currently the only Presidential candidate who doesn’t want to send White children off to die for Israel. pic.twitter.com/NN2dyHVFia

Duke broadly aligns himself with the “Palestinian” national movement, framing Israel as a state born in sin that “commits ethnic cleansing” against Levantine Arabs.

Despite House Speaker Nancy Pelosi (D-CA) calling on Omar to apologize for “deeply offensive” and “hurtful comments,” she made no mention of removing the Minnesota congresswoman from committee assignments.

Rep. Eliot Engel (D-NY) — chairman of the House Committee on Foreign Affairs where Omar holds a seat — linked Omar’s comments to antisemitism via a statement on Monday:

Strong condemnation of @IlhanMN’s comments from fellow Democrat- and chairman of a committee she sits on- Congressman @RepEliotEngel pic.twitter.com/U6LTHJlcvP

“In this fragile moment in our nation’s history, we must all redouble our efforts to engage in policy debates in ways that respect the dignity and humanity of all people.” — Read my statement on the comments made by Rep. Ilhan Omar. pic.twitter.com/srHL49WUBN

Omar subsequently offered an apology for her tweets, while still describing AIPAC as “problematic.”