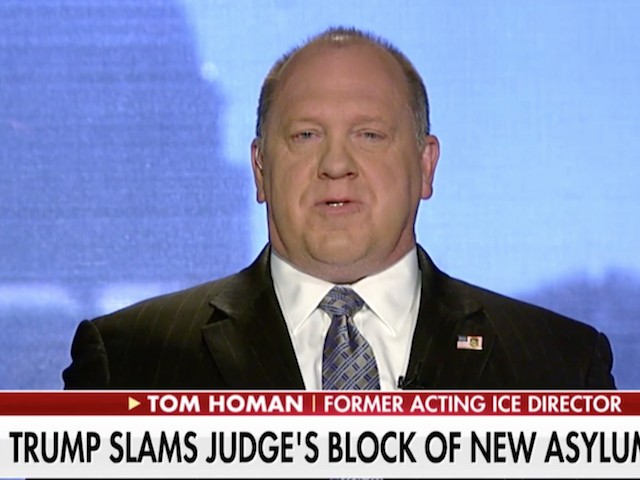 When asked about the judgment against Trump’s attempt to refuse asylum to people who enter into the country illegally, Homan said, “Two weeks ago I told you this would happen. When the president first came out, I was asked by Fox News how long it would take to get a lawsuit. I said within 24 to 48 hours. The Ninth Circuit has shown over and over again that they don’t believe in the rule of law. Look, the reason the caravan is here, to begin with, we have one Ninth Circuit court judge says we can’t detain families more than 20 days. We have another Ninth Circuit judge saying you can’t separate families. We have another Ninth Circuit judge saying you can violate laws of this country, enter this country illegally, which is a crime. For those who want to look it up, it’s a crime to enter this country illegally. Your own cameras were inside the caravan. Many folks are saying they’ve been deported once before and are coming back when you re-enter the United States after being deported once that’s a felony. We have more than 500 criminals in the group. We just open the gates. Now you can enter illegally, get the same due process as those who come through the port of entry doing it the right way.”.

Homan added, “I was called a fear-mongerer, but unfortunately I was right. Based on this ruling, there will be more caravans, instead of waiting in line like they were going to do in the safety and security of a port of entry protected by law enforcement. Now more caravans will come, enter illegally, put themselves in the hands of criminal organizations. We’re gonna bankroll smuggling organizations, and drug cartels who control the corridors heading to the border and these people will be put at risk. Women will be raped. People will die crossing the border. Children will drown, people will be misused by the criminal organizations as we’ve seen over and over again.”