“It’s been against my moral identity to tweet this for the last four years, but I hope he dies,” Rahim wrote in a tweet that has since been deleted. Her account is also locked: 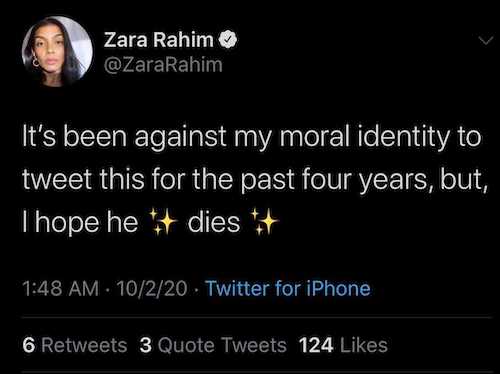 She reportedly followed up with a tweet reading, “I feel free.”

Rahim served as a former national spokeswoman for Hillary Clinton’s 2016 campaign and worked in the Office of Digital Strategy for former President Obama.

The former Clinton spokeswoman’s dark wish drew several sharp reactions on Twitter. Piers Morgan called her remark both “shocking” and “shameful,” while others said Democrats are “proving they’re the party of hate”:

She tried to delete her horrible tweet but @ZaraRahim is a communications person so she knows, the internet is forever. After finding out Trump had coronavirus, the former Obama WH staffer and Clinton National Spokeswoman tweeted “I hope he dies”. pic.twitter.com/ZQ9cRjb7P7

From the “they go low, we go high crowd…”

But @HillaryClinton hasn’t even bothered to condemn it.

Both Trump and the first lady are experiencing “mild symptoms” but are in “good spirits.” On Friday, Melania Trump thanked supporters for their prayers and said that she is “feeling good” overall.

Rahim is hardly the only blue check-mark on Twitter to share ill-wishes toward the president and his family:

No, but seriously, I hope he dies.

I hope they die!

I hope he suffers through this and dies as he’s losing on election night.