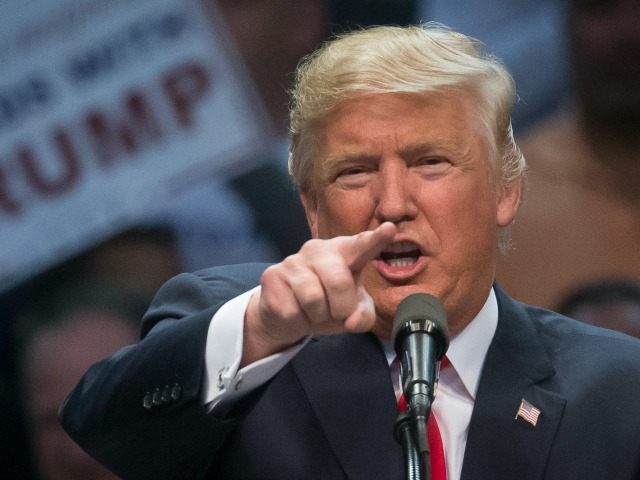 Suspension of entry or imposition of restrictions by President

Powell noted how the Supreme Court, in a 5-4 decision, recognized the president’s broad discretion granted to him via the aforementioned statute to suspend entry of aliens to the U.S.

“That particular wording in the statute was also recently discussed and affirmed in the Trump vs. Hawaii — quote travel ban — case,” remarked Powell. “This would be a plain application of the text of the statute as already affirmed by the Supreme Court, which recognizes the absolutely broad power that the president has to do this. That would cut out any claims of asylum or anything else; it would just stop all immigration except for people who are already on an approved list, who have gone through the lawful process already, and are pending approval, but it would stop any and all new immigration whatsoever”:

LISTEN:
Mansour asked, “Would this involve shutting down the border to do this?”

Powell replied, “Essentially, yes. You wouldn’t necessarily have to seal it off physically, but that means that anybody that came in after the date of that executive order would be here illegally.”

Mansour asked, “Does this require any sort of congressional approval to do this?”

Powell answered, “No, not at all. It’s solely within the authority of the president. Congress has already given him that authority. … The Supreme Court decided it and approved it and even recognized how very broad the language was and how much deference was to be accorded to the president because of the things he has to consider as opposed to just particular instances of immigration.”

Powell went on, “In light of the Supreme Court’s decision that cites this particular statue and the language throughout the decision, even in the concurrence of Justice Thomas, [a federal court’s injunction] should not be successful at all. Another point I’ve made in the past and one that Attorney General Jeff Sessions has picked up on is that this notion of any sort of nationwide or universal injunction is a crock. No district judge has the authority to issue a national injunction, so at most, it would be in whatever particular small district that judge presided over and, frankly, given the wording of the statute, I’m not even sure the president would have to honor it.”

Powell wrote of the approaching migrant caravan in an opinion editorial published Monday:

Now, mobs of thousands are on the march to our borders—creating an immediate existential threat to all that we have and that we are. Violent gate-crashers demanding access to our country are invaders — not immigrants. The invasion must stop — and now. … Strangers breaking into American is no different than breaking into your home and demanding that you house, feed, clothe and educate them while providing for their medical needs. Americans are overloaded and fed up. … In the interests of the United States, the President can hit the pause button and stop all immigration now. He can include exceptions — or not. He can seal the border legally and physically for the protection of the citizens and lawful residents of the United States, and this President has the courage to do so.

Powell described the motivations of caravaning migrants as economic: “They just want to live in a better house.”

Powell noted the federal government’s duty to prioritize the welfare of American citizens over other considerations: “We have to find a way to encourage every other country to take responsibility for the health, welfare, and safety of its own citizens. We have the United States of America because our ancestors fought for it and bled for it around the world. We have sacrificed more lives around the world for the sake of freedom than any other country I can imagine, aside from the fact we are the most generous [country] on earth. Americans want other people to be happy and successful and safe, but we cannot take on the world’s problems if we allow our resources and energy … to be depleted. We have to maintain a position of strength to be the beacon of freedom in the world.”

Powell went on to say, “Whenever the president wants to [he can re-open immigration]. He has total flexibility in deciding how long it needs to happen. I think it was done for extended periods of time after World War II. We had a maximum number that we could assimilate. Right now, we have at least 22 million illegal aliens in the country per the Yale-MIT study, which is certainly no bastion of conservatism. There have been 39 million social security numbers stolen, which tells me that the actual number of illegals in the country probably is a lot closer to 39 million. I don’t know how many thousands of homeless veterans we have who need health care and homes. We have our own children living on the streets being humanly trafficked, and we have the fentanyl crisis and opioid crisis, and … there’s a new mysterious disease which has spread across 22 states already. It’s polio-like. It’s called acute flaccid myelitis, and it causes paralysis in children and young adults.”

“Until we get our own house in order, we cannot help any other people,” assessed Powell.

Powell recommended a pause on immigration and refugee admissions to facilitate assimilation of existing groups of immigrants and refugees.

“I think it’s something that needs to be done at this stage in the life of our country because of all the other issues,” opined Powell. “We have taken in more refugees and more aliens than any other country in the last several years, and they’re not assimilating. They’re still speaking their own language in their own homes. They haven’t learned American values and traditions. There’s a lot that needs to be done to absorb the ones we have legally admitted, and we need to encourage the return of those who are not legally here, along with depositing their false IDs at the border when they go home, and just take better care of our own citizens until we get our house in order.”