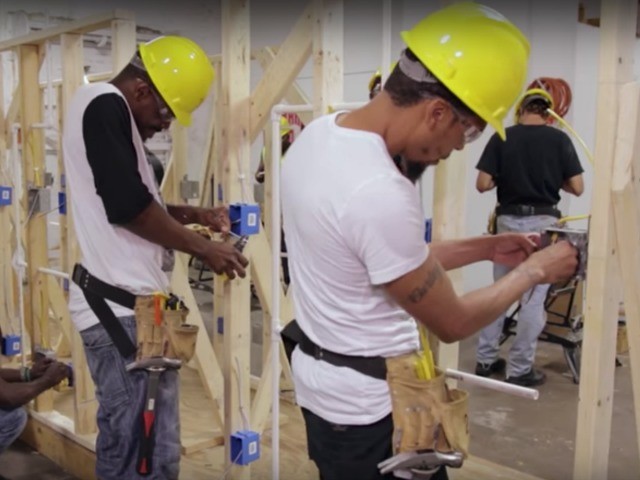 Project Jumpstart “is a training program that prepares Baltimore residents for work in construction,” says a CNBC report:

It’s a 90-hour course designed to get workers ready for the realities of the construction job site. Classes are held twice a week and students receive a $25 stipend for each class. If they are late, however, they lose the stipend, and on the third absence they are out of the program, according to placement director Kate McShane.

McShane says 75 percent of participants have some acquaintance with the criminal justice system.

The project has placed roughly 650 graduates into jobs at more than 150 companies around Baltimore, which is still suffering from a massive crime wave that began when President Barack Obama began his anti-police campaign in 2014.

Under Presidents George W. Bush and Barack Obama, construction companies were able to freely hire illegal migrants, legal refugees, and legal immigrants in place of young Americans. That high-migration policy boosted Wall Street by lowering wages for employees, so it pushed many young Americans out of the workforce. In 2008, the construction industry collapsed, sharply reducing the number of experienced workers.

Since 2017, Trump’s immigration policy has reduced the inflow of refugees and illegal immigrants. Trump has also resisted the push by companies and GOP leaders to raise the inflow of cheap visa-workers. This policy is pressuring companies to spend more money to find, train and hire replacements from the nation’s population of high-school dropouts, disabled people, and people with a criminal record. The worker shortage is also forcing up wages, especially for the least-skilled groups.

Trump’s fast-growing economy added 250,000 jobs in October, pushing unemployment to record lows, and prodding companies to compete with each other for the shrinking supply of workers.

“This is the best labor environment in over a decade,” Joseph Brusuelas, chief economist at a consulting firm, RSM U.S., told the Washington Post. The article said that African-American unemployment had dropped to 6.2 percent. The headline on the Post‘s article said, “‘That was shocking’: Strong job gains give GOP extra fuel heading into Election Day.”

The JumpStart project’s funders include the state government, and several foundations, including foundations which are part of the Koch brother’s pro-migration network of pro-business lobbyists.

So far, Trump’s high-pressure economy has managed to raise the share of working-age people in the job market back to pre-2009 levels, according to Ernie Tedeschi, an economy who worked in President Barack Obama’s White House. The jargon term for the share is “EPOP,” for employment-to-population ratio:

Also, this is kind of an emotional jobs day for me, because after doing these graphs for years now, demographically-adjusted EPOP (using my approach) passed its (entirely arbitrary choice on my part) 2006-7 threshold. ::sniff:: pic.twitter.com/lQ4YKZTUWq

The U.S. economy is employing 157 million people, but there are many working-age people still without jobs. For example, roughly 500,000 young men who fell out of the job market after the 2008 crash are still not working. Bloomberg reported:

The young ones have fared particularly badly. Many of them exited high school into a world short on middle-skill job opportunities, only to be broadsided by the worst downturn since the Great Depression. Employment plummeted across the board during the 2007 to 2009 recession, and 25- to 34-year-old men fell far behind their slightly-older counterparts.

About 14 percent of 25- to 34-year-olds with just a high-school degree weren’t in the labor force in 2016, up from 6.4 percent in 1996, according to Federal Reserve Bank of Kansas City analysis by economist Didem Tuzemen.

Some of these young men are drug addicts, some live in areas which receive little investment, some are truly disabled, and some are criminals who may yet join Baltimore’s Project JumpStart.