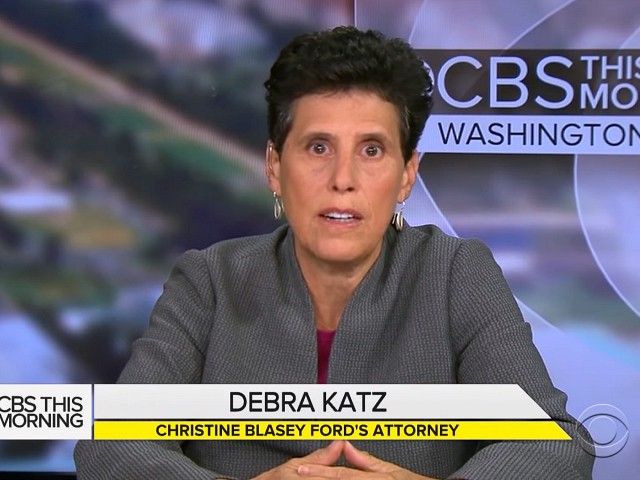 The legal team of Christine Blasey Ford has come out against an agreement reached by Republicans on the Senate Judiciary Committee to delay a full Senate vote on Supreme Court nominee Brett Kavanaugh’s confirmation, allowing the Federal Bureau of Investigation (FBI) to conduct a week-long investigation into their client’s sexual misconduct allegation against the judge.

“A thorough FBI investigation is critical to developing all the relevant facts,” attorney Debra Katz said in a statement released Friday evening. “Dr. Christine Blasey Ford welcomes this step in the process, and appreciates the efforts of Senators Flake, Murkowski, Manchin and Collins — and all other senators who have supported an FBI investigation — to ensure it is completed before the Senate votes on Judge Kavanaugh’s nomination. No artificial limits as to time or scope should be imposed on this investigation.”

NEW Stmt from Dr Ford’s Attorney: “A thorough FBI investigation is critical to developing all the relevant facts. Dr. Christine Blasey Ford welcomes this step in the process” pic.twitter.com/yJDqArvyg1

Earlier, the Senate Judiciary Committee announced it will request President Trump order the FBI to conduct a “background investigation” limited to “current credible ” allegations against Kavanaugh to be completed “no later than one week from” September 28, 2018.

I support this sensible agreement. pic.twitter.com/5QtenWGGqb

The request came after Senate Republicans met to discuss an 11th-hour request presented by Sen. Jeff Flake (R-AZ), who recommended the full Senate vote to confirm Kavanaugh be pushed back in order for a seven-day FBI probe to take place.”I think it would be proper to delay the floor vote for up to but not more than one week in order to let the FBI do an investigation, limited in time and scope to the current allegations that are there, limited in time to no more than one week,” the Arizona lawmaker said prior the committee vote. “And I will vote to advance the bill to the floor with that understanding.” Shortly before 2:00 p.m., the committee voted 11-10 recommend the judge be the next Supreme Court Justice.

Hours later, the White House press secretary Sarah Huckabee Sanders announced President Donald Trump ordered the bureau to investigate the matter. “I’ve ordered the FBI to conduct a supplemental investigation to update Judge Kavanaugh’s file,” the president’s statement read. “As the Senate has requested, this update must be limited in scope and completed in less than one week.”

Prior to releasing the president’s statement, Kavanaugh, through White House deputy press secretary Raj Shah, communicated his readiness to cooperate with the investigation.  “Throughout this process, I’ve been interviewed by the FBI, I’ve done a number of ‘background’ calls directly with the Senate, and yesterday, I answered questions under oath about every topic the Senators and their counsel asked me,” the Court pick said. “I’ve done everything they have requested and will continue to cooperate.”