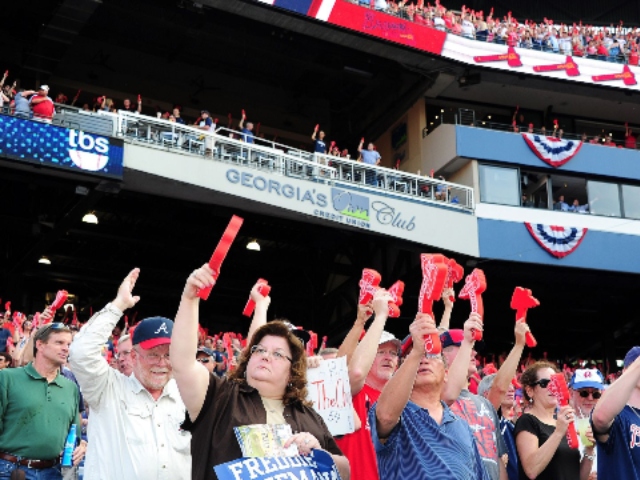 Forbes magazine contributor Terence Moore, was frightened by the Atlanta Braves fans when they broke out in their traditional tomahawk chop chant at a recent game. So frightened in fact, that he felt compelled to write a piece tsk-tsking Atlanta’s “mostly white fans” for their enthusiasm.

Saying he does not cheer for sports while in the press box, Moore opened his October 9 article saying that if he were to cheer “It wouldn’t have been close to resembling the tomahawk chant.”

Moore celebrated the fact that every team in sports “not named the Washington Redskins” has already dumped their “offending Native American” names, except for the Atlanta Braves. To Moore, the Braves are still embarrassing themselves with “a ballpark full of mostly white fans” performing the tomahawk chop chant. And he wants “someone” to “stop Atlanta Braves fans from chopping and chanting.”

“Every game around here, folks do their chopping with red foam-rubber tomahawks while delivering their version of ‘Indians’ hollering down mountains in pursuit of cowboys during black-and-white westerns,” Moore carped.

The Forbes scold continued saying that this “backward thinking” shocked him during a recent Braves-Dodgers game at Sun-Trust Park.

“With the Dodgers leading 2-0 in the series after they dominated the Braves on the west coast, the SunTrust Park people running the scoreboards and the organ worked overtime for Game 3,” Moore wrote. “The former kept flashing louder and LOUDER with a cartoon tomahawk on the screen, and the latter threatened to wear out the tom-tom beat.”

The exasperated Moore then noted, “Eventually, fans were chopping and chanting out of their minds.”

Then the writer noted that the chanting “scared” him.

“It was uncomfortable, but it was fun,” he said of the tomahawk chop chant. “Then it was scary.”

It was the white faces that scared him:

I looked at the faces Sunday of those doing the chopping and the chanting, and I didn’t like what I saw. I had similar thoughts Monday, when the chopping and the chanting became an epidemic during the game. Along those lines, Braves officials continued their new tradition of dimming the lights to watch Braves fans chant as usual while ditching their foam-rubber tomahawks for smartphones turned to flashlight mode.

I mean, really? How is this happening with the Braves when baseball officials joined those of the Cleveland (ahem) Indians earlier this year to say 2018 will be the last season of Chief Wahoo, the (ahem) Tribe’s racist logo of 71 years? I graduated from Miami (Ohio) University, where the sports teams were the Redskins for a generation before they became the RedHawks during the latter 1990s. St. John’s went from Redmen to Red Storm, Marquette swapped Warriors for Golden Eagles, and other colleges and high schools have followed a similar path. Still, folks have shrugged over the Braves’ choppers and chanters for decades

Moore concluded his lament saying that the tomahawk chop chant was not all that bad when it first popped up in Atlanta. But he insisted that it must now be eliminated because, “The world has changed, though.”

So, for the “scared” Terence Moore, it will be the heckler’s veto for the Braves’ tomahawk chop. It is time to further PC baseball, he says.