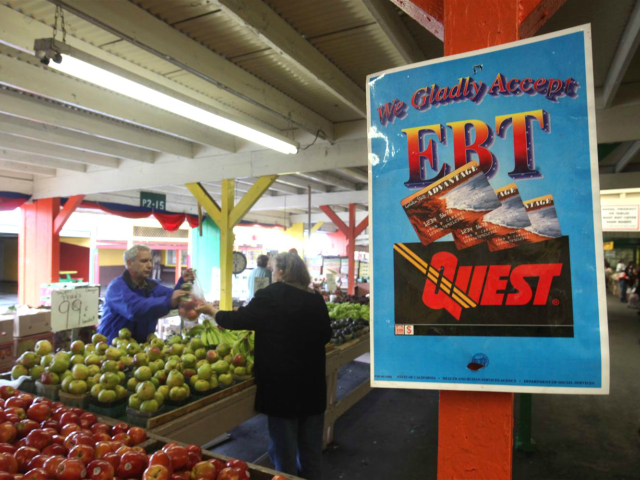 Participation in the nation’s food stamp program has sunk to an all-time low, reaching its lowest level in nearly a decade, according to the latest data from the U.S. Department of Agriculture (USDA).

The last time American participation in the food stamp program dipped this low was nine years ago, when 38,184,306 Americans received food stamps, according to the data.

The most up-to-date numbers also show enrollment in food stamps has declined for ten straight months.

Using the latest data from the USDA, here is the month-by-month breakdown of how many people canceled their SNAP benefits in fiscal year (FY) 2018:

The consistent decline in enrollment over the past ten months is on pace with the steady decline in SNAP participation since 2013, and the decline seems to be continuing during President Trump’s tenure in office.

Since February 2017, Trump’s first full month in office, enrollment in SNAP dropped by 3,288,304, according to the latest USDA data.

The enrollment drop under Trump can mainly be attributed both to the Trump administration’s efforts to reform the nation’s food stamp program and the improving economy.

But the reforms that spurred the overall decline in enrollment since 2013 began at the state level, when state legislatures passed bills requiring food stamp recipients to work, participate in job training, or volunteer 20 hours per week to receive benefits.

These individual states, such as Maine, began implementing or reinstating work requirements to participate in SNAP during the Obama administration’s second term— when enrollment in the welfare program reached its highest level since its inception.

A House version of the bill in May estimated that if federal lawmakers passed legislation requiring food stamp recipients to work, the law would get at least 1.6 million people off of food stamps.

The House version of the Farm Bill narrowly passed by a 213-211 vote and included the work requirements provision. The bill passed with no Democrat support. The Senate bill did not include the food stamp provision.

The previous year’s Farm Bill expired at midnight on September 30, and Congress has not yet passed legislation to replace the 2017 Farm Bill.

Senate Majority Leader Mitch McConnell (R-KY) said Friday that lawmakers would pass a farm bill by the end of this year, although he warned that lawmakers— specifically Senate lawmakers— are finding it hard to agree on the food stamp work requirements provision.