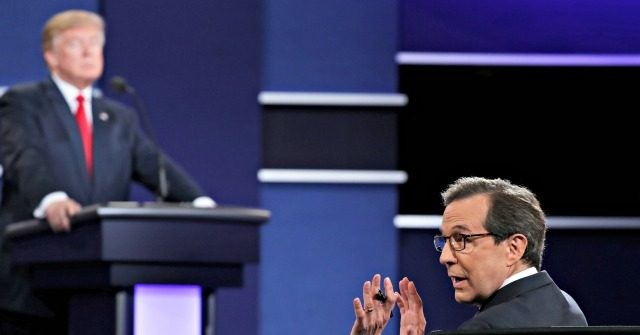 Wallace said, “In terms of what went on in the hall, it was curious. The Biden camp and Mrs. Biden, Senator Chris Coons of Delaware, all their people all came in wearing masks and wore them throughout the entire debate. The Trump family came in, I’m told, wearing masks but then took them off once they sat down in their seats. That actually violated the rules of the Cleveland Clinic, which was in charge of all the safety issues inside the hall, which were that everybody except for the president, vice president, and I were not supposed to wear masks, I mean we’re supposed to wear masks. We were the only ones told we were not to wear masks.”

He continued, “Actually a safety person, a health person from the Cleveland Clinic came up to the first family when they were seated and offered them masks in case they didn’t have them and they were waved away. People in the hall noticed that they weren’t wearing masks, and everybody else in the hall was wearing a mask. When the debate ended, Mrs. Trump came over, walked past me. She was not wearing a mask. Mrs. Biden walked past me to her husband, and she was wearing a mask. So there was a difference in the way the two families and their camps treated the health safety regulations inside the hall.”

He concluded, “I’ve always been disturbed, frankly, that people think the mask is a political issue and wearing the mask or not wearing the mask says something about your politics. It’s a safety issue. The best scientists in America say that they’re a perfect cure or vaccine but wearing a mask today is the best weapon we currently have to avoid getting the disease and transmitting the disease. If there is one lesson from today, it’s here is the president of the United States who lives in the biggest bubble that exists on the planet, and he got it. Through no fault of his own. And so the answer is wear the damn mask.”