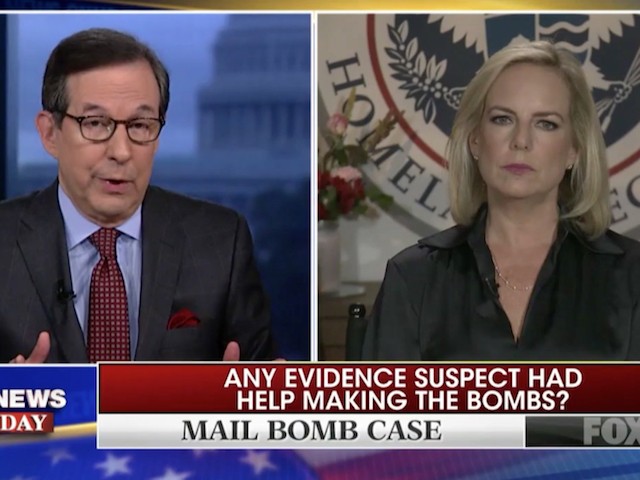 On this weekend’s broadcast of “Fox News Sunday,” host Chris Wallace pressed Homeland Security Secretary Kirstjen Nielsen on how the migrant caravan from Central America was a “national security threat.”

Wallace asked, “There’s a report that the president is considering making a major speech this week in which he will announce that he is sealing the border even to people seeking asylum. On what legal basis could he do that?”

Nielsen said, “I think what the president has been saying and will continue to say and certainly what I have been saying is this caravan is not getting in. There is a legal way to enter this country. Those who choose to enter illegally will be stopped. We are working with our partners in Mexico. They have taken unprecedented efforts within their territory to ensure an orderly flow and that those who have no legal right to be there are removed. We intend to do the same, but my general message to this caravan is, do not come. You will not be allowed in. There is a right way to immigrate to the United States, and this is not it. ”

Wallace asked, “I want to drill down on this a little bit because according to reports the president may use the same legal authority he did for the first travel ban, which is Section 212F of The Immigration and Nationality Act. I fully understand that people coming from Honduras don’t have a right to come into the U.S. illegally, but on what basis can you say that this caravan poses a national security threat?

Nielsen said, “We have a crisis at the border right now. We are stopping between 15oo and 1700 people a day trying to cross illegally into this country. This caravan is one iteration of that, but frankly, we eventually see caravans every day with these numbers. So I think with the president is making clear is every possible action, authority, executive program is on the table to consider and ensure that it is clear that there is a right and legal way to come to this country and no other ways will be tolerated.”

Wallace pressed, “I fully understand that and a lot of people would say we need to reform the laws. The question I have is he’s talking about specifically a provision where the president gets to protect national security. We are talking in many cases hear about women, about children, about babies, how did they threaten national security?

Nielsen said, “This isn’t a ticketed event. If you don’t have a membership in the caravan. There are consistently moment to moment folks raising a hand saying they are part of the so-called caravan and then there are others who yesterday said they were part of the caravan, today say they are no longer a part of the caravan. What we are really talking about is the flow of people that are headed towards the United States. They have chosen to break laws along the way. You saw some of them frankly overwhelm the border between Guatemala and the country of Mexico. Mexico has offered them asylum, in some cases, they have refused. Mexico has offered them work permits in some cases they have refused. And I think with the president and I are both saying and we want to be clear on this is if you seek asylum, do so in that country. Mexico has offered you refuge. If you want a job, that is not asylum. If you want to be reunited with your family, that is not asylum. If you want to just come live in the United States, that is not asylum. There are legal ways to do that, but this is about the rule of law.”