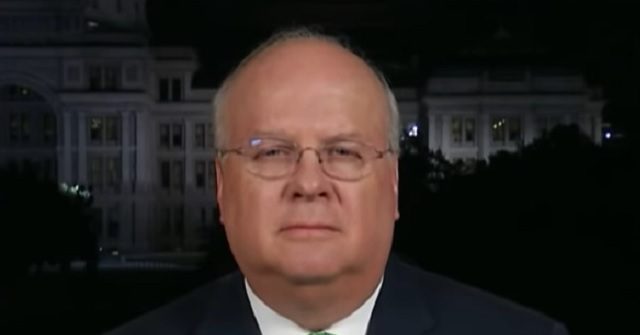 Rove argued on Fox Business Network’s “Varney & Company” that Americans were going to vote on the economy, whereas the people who have decided the former vice president “turned a blind eye to his son’s corruption.”

“I have two concerns, one strategic and one tactical,” Rove outlined. “The strategic concern is the people of America are going to vote on the economy. The people who already decided Joe Biden turned a blind eye to his son’s corruption — they’re already in the Trump camp, the people up for grabs care deeply about the economy and the contrast between Donald Trump and vice president Biden would serve the president well. I’ve also got a tactical concern, which is we are trying to introduce new material here at the end. The president trying to introduce new material and convince the American people of it. I don’t think that is necessary.”

“We already know that Joe Biden said when confronted with evidence that his son got cozy with Burisma because he was the vice president, and he flew on Air Force Two to China and got the sweetheart deal with the Chinese private equity firm,” he continued. “We know those things, and those things are proven, and Biden admits them, but what does he say about them? ‘My son did nothing wrong.’ So, the president has got a very strong line, saying, ‘Look, your son got paid millions of dollars by a corrupt Ukrainian gas company because you were vice president, and he got a big equity junk, Chinese private equity fund because you were vice president and you don’t see anything wrong with it.’ That is an easy way to sell this issue to the American people, but most of the time, most of the emphasis tonight ought to be on the things people care about starting with the economy but also looking for opportunities to talk about foreign affairs.”

Host Stuart Varney noted that the economy is not one of the topics listed for the debate.

“Look, you get asked a question you spend time answering the question, and then you pivot,” Rove explained. “Nobody goes into that say I’m only going to devote my time to answering the questions that the moderator gives me. I have a narrative to lay down and I have a construct in this election I want to share with the American people, so, I’m going to answer the question and pivot. And the president could do that just as he did in the first the debate.”