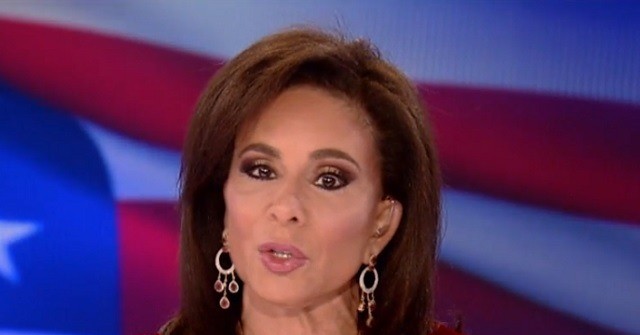 Saturday, FNC host Jeanine Pirro opened her program by criticizing the Biden administration for the crisis on the U.S.-Mexico border.

PIRRO: Since I visited the border a couple of weeks ago, a lot has happened. Tens of thousands more illegals and unaccompanied minors have entered the country. Border Patrol is even more inundated than they were two weeks ago.

We are finding more and more that when the rare group of individuals are being tested, they have a 10 percent COVID positive rate. No surprise, given the pictures we see of the immigrants literally within inches of each other traveling in large groups through many countries are now actually being sent into the interior of the United States to a town or village near you.

Shockingly, as they move through the interior, we hear of teachers now, the same ones refusing to teach our children volunteering to teach these immigrant children through July, an issue I’ll address in my closing statement.

It appears the Biden administration’s theme of America last is in full force.

The work of the cartels and the coyotes continues as they inhumanely traffic children and young girls in the dangerous trek from the Northern Triangle.

This week in a testament to their brutality, we saw a coyote literally throw two little girls ages three and five over the 14-foot border fence from Mexico into the middle of New Mexico in the United States in the desert miles from the nearest residents.

It is a video of smugglers abandoning little girls and leaving them for whatever natural or human predators that might find them. Fortunately, Border Patrol again has come to the aid of those victims.

As this crisis explodes on our southern border, the amazing part has been President Biden’s refusal to even visit the region to see how his policies have damaged and continue to damage our nation.

And in a move that is almost humorous, he has essentially handed off responsibility for this crisis to his Vice President, Kamala Harris, who seems to see humor in everything.

For her part, Miss Harris has refused to answer any questions about the border. In fact, when asked if she would even visit the border, this was her response.

QUESTION: Do you plan to visit the border?

KAMALA HARRIS (D), VICE PRESIDENT OF THE UNITED STATES: Not today. But, I have before, and I’m sure I will again.

PIRRO: As an aside, why does that woman always laugh when she is asked serious questions? How crazy is that the Joe Biden would appoint his Vice President Kamala Harris to solve the border crisis when she compared ICE agents and essential law enforcement agency to the Ku Klux Klan?

A little White House and trade here, a senior aide for Kamala told reporters that the Vice President, quote, “would not be doing the border.” And instead, she would be tackling the policy issues focusing on the root causes of illegal immigration, essentially removing her from any blame for the disaster at the border.

But we don’t need her to head an investigation, a commission, or a study in order to determine the root cause of this surge in illegals crossing our border.

The root cause is clear, and it is the Biden-Harris administration and their reckless policies.

On January 20, they swung America’s doors open to any and all who wanted to enter into the United States, and they haven’t stopped coming through those doors.

The invitation was clear. Even Mexican President Obrador has referred to Joe Biden as the quote, “Migrant President.” He places blame solely on the shoulders of Joe Biden, especially since Joe canceled the MPP remain-in-Mexico policy agreed upon by President Trump and the Mexican President.

Not only is this a public health crisis because of the administration’s inability or refusal to test migrants for COVID before shipping them all over the country, not only is this a humanitarian crisis because of the administration’s decision to place children in horrifying, unacceptable, inhumane, and barbaric conditions, and those are Alexandria Ocasio-Cortez’s words. This is a national security crisis.

We are a sovereign nation, and yet we have no idea who is coming into this country. Sheriff Dannel’s told me individuals from more than 141 countries had been to the U.S. along with his sector. The hundreds of thousands crossing are not just from the northern triangle of El Salvador, Honduras, and Guatemala. They are coming from Turkey and Iran, and Yemen, and 138 other countries.

Take a listen to Congressman McCarthy.

REP. KEVIN MCCARTHY (R-CA): The units of people who are coming from different countries from Iran, from Yemen, from Sri Lanka from Turkey, that it is different than it was before.

PIRRO: Ninety percent of the heroin coming into this country, I said 90% comes in through our southern border. Fentanyl is coming in, in amounts large enough to take down an American city.

So that’s just a recap of the two weeks since I’ve been at the border. Every week, the nightmare becomes greater and bigger and more dire.

Stay tuned, everyone. It’s only going to get worse.