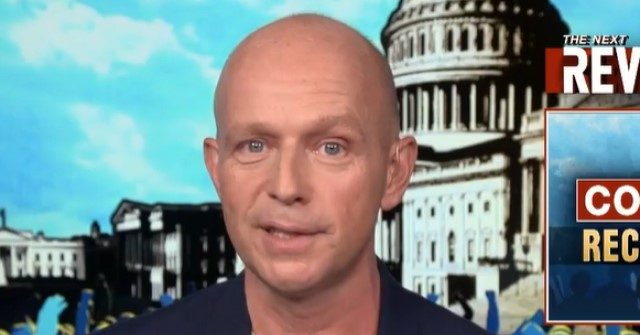 Sunday, Fox News Channel’s Steve Hilton spoke about the prospects of a Joe Biden presidency, which he said would have economic and cultural impacts.

However, he said Biden would not necessarily be the one in charge.

It is obvious that if elected, Biden would be President in name only, a feeble stooge of fighting factions from the far left to the elitist establishment desperate to get their power back.

In a way that became frighteningly clear this week, the establishment machine declared all-out war on President Trump and his supporters, an unprecedented alliance of bias to sneak Biden into the Oval Office with zero scrutiny.

Democratic legitimacy comes from scrutiny, from accountability and debate. Instead, the establishment machine is undermining democratic norms with the tactics of a one-party state. You saw it in those town halls: kid gloves for Biden; for Trump, badgering, hectoring and pathetic attempts at scandal-mongering.

White supremacy, again? Don’t the self-indulgent Biden propagandists see that every time they do this, they elevate white supremacy and further tear our social fabric?

You saw the establishment machines authoritarianism, with Big Tech censorship of new evidence that Joe Biden is compromised by China. We’ll have much more on that later in the show. But here’s what it means for you.

For 50 years, the establishment machine had its own way. Big Business colluded with Big Government and later Big Tech. They sucked up to China, opened the borders, shipped jobs overseas, fought and lost endless wars.

The rich got richer, the workers got screwed. The coast boomed as the heartland was hollowed out.

If the machine wins, of course, workers will lose. Establishment economics means more jobs to China, more wage stagnation. But now, you’d get the added evil of their intolerant woke ideology.

They talk about white supremacy. If Biden wins, it’ll be woke supremacy.

In 2016, people told the establishment machine, we’ve had enough of your failure, your sneering, your snobbery, your smug supercilious superiority, but they didn’t get the message. They didn’t change.

They hate Trump and his supporters even more. So this time, tell them again, don’t just rage against the machine, vote against it.

As for the Trump campaign, of course, the tactics of the establishment machine are outrageous and unfair. But in the two weeks left, the focus must be on campaigning, not complaining.

Thursday’s debate is crucial, and here’s a lesson from what we’ve seen so far. Literally, the only issue where Biden has come under any pressure is court-packing. That’s because it hurts him however he answers.

Now we need another one that will make him dodge and dissemble, but one with even more direct relevance to voters’ lives.

Biden has made $8 trillion of un-costed spending promises, and he had reversed the Trump tax cuts. It adds up to $7,800.00 more tax for the average household.

On Thursday, someone should ask him about that, politely, of course. And with plenty of time for Biden to try and answer.