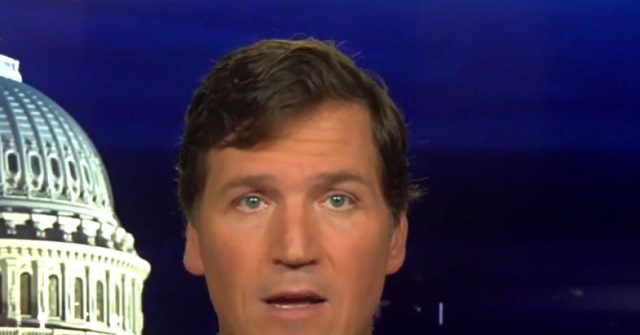 According to Carlson, the debate offered the public a better indication of what it will take for a candidate to win. However, he also said it foreshadowed what the left would do under Biden to strengthen its grasp on power.

CARLSON: Holy smokes. It was that intense.

So what do we learn last night at the debate? Well, America deserves better. That’s the first and most obvious thing we learned. All kinds of people said that today, and they were right. This is a great country. The most decent people in the world live here. We ought to be proud of the fact that we’re Americans, proud of our culture, proud of our history.

Most of us want it all to continue. We want the nation our grandchildren inherit to be as stable and as happy as the country we grew up in. But last night’s debate gave us a little confidence that will happen.

It was a painful, highly depressing 90 minutes. At times, things seemed out of control. We could go on about it, but you saw it, so you know what it was like. That’s the overview.

But as a political matter, the main thing we learned last night is that it was a mistake to spend so much time focusing on Joe Biden’s mental decline.

Yes, it’s real. Yes, Joe Biden is fading. We’ve showed you dozens examples of it for months now. But on stage last night, Biden did not seem senile. If you tuned in expecting him to forget his own name, and honestly, we did expect that, you may have been surprised by how precise some of his answers were — not all of them, but enough of them.

That’s obvious if you look at the results, but it’s easy to forget it and many did.

What matters always — to voters anyway — is what you do, not what you say. Right now, many would like to see someone defend the country. America has never been under fiercer attack than it is now. Virtually all of the attackers come from the domestic left. They’re Democrats. They are Biden voters.

“I am the Democratic Party,” Joe Biden reminded us last night. That’s true. It should be enough to keep Trump in office.

The Democratic Party has become more radical than any major party in the history of the country. Its leaders plan to dismantle our system, the system our founders created centuries ago. A system that countless other countries have envied so much they copied.

Democrats want to do away with it. They want to abolish the Electoral College. They’re trying to end traditional Election Day voting. They intend to invalidate the filibuster and guarantee permanent control of the House and the Senate by admitting D.C. and Puerto Rico into the union.

We will have 52 states and the Democrats will be in charge forever. That is their plan. We’re not making it up. They’ve said it.

Scariest of all, they are planning to hijack the Supreme Court by expanding the number of Justices, leading Democrats have openly endorsed this idea. It’s not a small change. It would end our third branch of government.

The Judiciary would cease dispensing justice. It would instead become an instrument of partisan power politics wielded exclusively on behalf of one party.

Joe Biden was asked about this last night. Here’s how it went.

CHRIS WALLACE, FOX NEWS CHANNEL ANCHOR: Are you willing to tell the American people tonight whether or not you will support either ending the filibuster or packing the court —

JOE BIDEN (D), DEMOCRATIC PRESIDENTIAL NOMINEE: Whatever position I take in that, that’ll become the issue. The issue is, the American people should speak. You should go out and vote.

You’re in voting now. Vote and let your senators know how strongly you feel.

Vote now. Make sure you in fact, let people know — to your senators.

TRUMP: Why wouldn’t you answer that question?

BIDEN: Because the question is —

BIDEN: The question is —

BIDEN: Will you shut up, man.

CARLSON: So there are a couple of things to note about the exchange you just saw. Nobody forced Biden to answer the question, a key question. That was frustrating to watch. But it was also easy to interpret what he meant.

Of course, Joe Biden plans to pack the Supreme Court, otherwise he would have denied it. Court packing is not popular with the public. Nearly 70 percent of Americans oppose it. That includes more than half of all registered Democrats. But the extremists who now run the Democratic Party are demanding it and Joe Biden will follow their lead.

That’s what radicalism looks like. Anything that stands between you and the power you seek, you destroy, even if it’s the world’s oldest Constitutional Court, which our Supreme Court is. We shouldn’t be afraid of people who are willing to do things like that.

But in Joe Biden’s case, we don’t seem to be afraid and that leads to something else that we learned last night at the debate. Tone is everything.

Biden all but admitted on stage that he plans to tear down our system, but he did it in a calm, “This is your Captain” speaking voice. Biden seemed almost reassuring, even as he hinted at revolution.

Donald Trump, by contrast, defended our system, a system that most people in this country support. Nothing Trump said on stage was radical. Virtually nothing he ever says is radical, at least, if you compare it to public opinion polling on the issues.

And so in the end, amazingly, tragically, many people watching last night may have concluded that Joe Biden is the stable, steady alternative. They concluded this, even as Joe Biden suggested that he plans to change their lives, their country permanently and forever in ways they won’t like.

It’s quite a trick, the illusion of reasonableness. Barack Obama was the master of this. Biden learned well — and so he continued last night.

Watch Joe Biden explain that actually, he is the America first candidate.

BIDEN: It would create an additional $1 trillion in economic growth because it would be about buying American that we have to — we’re going to make this Federal government spends $600 billion a year on everything from ships, to steel, to buildings and the like.

And under my proposal, we’re going to make sure that every penny of that has to be made by a company in America.

CARLSON: “We’ve got to buy American, buy American,” says the man who welcomed China into the World Trade Organization and has been sucking up assiduously towards leaders ever since. “Fight the billionaire” says the man whose campaign is funded by oligarchs on Wall Street and in Silicon Valley.

Joe Biden stole Donald Trump’s lines. It was remarkable. How is Biden able to do that?

Well, the Trump campaign should ruminate on that question. Trump’s advisers/in-laws are telling him to brag about the number of people he is let out of prison. This, at a time, when our crime rate is exploding and people are dying as a result of it.

Joe Biden’s advisers plan to get many more people out of prison, but they’re not bragging about it on stage. No, they’re hiding it. Instead, they use the debate to talk about the Buy America Program they will never implement.

What we learn here is that Biden people are very serious about politics. They know what the public wants, even if they plan to ignore it, if they’re elected.

And of course, they’re willing to say anything that helps. That’s another thing we learned last night. We learned that quote, “white supremacy” is now the single greatest threat to our country. How can that be you ask? Well, it turns out that mobs of white supremacists just burned down Minneapolis and then Kenosha. They trashed Portland and Seattle. They shot cops in Louisville. They torched Wendy’s. They clean up the Nike store.

They destroyed public monuments in Atlanta and San Francisco. They defaced war memorials in Washington. They looted Macy’s in Midtown Chicago.

Also in the City of Chicago, white supremacists murdered hundreds of African-Americans, and everywhere they went, these right-wing bigots spray painted racist graffiti on buildings and threatened sleeping citizens in their homes. The white supremacists did this.

You saw it on TV. Damn those, Proud Boys.

It was bewildering to listen to all of this. It wasn’t just factually untrue. No, it was insane. It was crazier than any conspiracy that Google has ever banned.

Yet, they are now demanding that you believe it, and if you don’t believe it, they’re going to punish you.

So why are they doing that? That’s a good question. It’s also an ominous sign.

If they can make you accept a lie that ridiculous, what do they plan to do next? Maybe someone will ask that question in the next debate.