Although Florida Democratic gubernatorial nominee Andrew Gillum’s track record as mayor has seemingly been of little interest to many in the Sunshine State’s political media, one of the hopefuls running to replace Gillum as Tallahassee’s mayor is not ignoring it.

According to a recently published article by Steve Smith of Tallahassee Reports, former Gillum chief of staff and mayoral candidate Dustin Daniels is campaigning on improving upon what he called the city’s “highest number of murders in history last year.”

The mailer, proclaiming Daniels will “move Tallahassee forward” as mayor, backs up a previous report that showed a significant increase in Florida’s capital city’s murder rate while Gillum served as mayor. 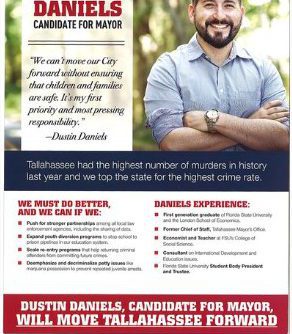 As Smith pointed out, Daniels’ claim contradicts claims from Gillum on improvements in public safety for Tallahassee while he served as mayor.

“The message put forth by Daniels is at odds with the message of gubernatorial candidate Andrew Gillum, who is telling voters Tallahassee is already doing better due to the decline in crime for the first six months of 2018,” Smith wrote. “In the process, Gillum is ignoring the decisions that contributed to the record-setting crimes rates in Tallahassee which include historical highs in murders.”

Gillum faces Republican gubernatorial nominee Ron DeSantis in November in an election to determine who will replace Rick Scott as Florida’s governor.