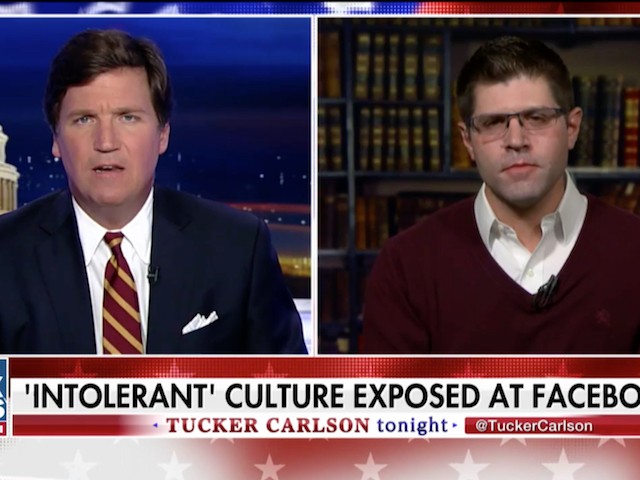 Wednesday on Fox News Channel’s “Tucker Carlson Tonight,” former Facebook engineer Brian Amerige said he left the company because “there is a vocal minority inside Facebook that is belligerent beyond belief in a quest, I think, to implement social justice policies.”

Amerige said, “I can say, though, is that executives at the company do actually take the sort of assertions and claims that I have made very seriously. And they didn’t fire me. They engaged me. I actually spent the better part of the last month working with them to try to figure out how to improve this stuff. There’s a really big distinction of how the executives are handling this and what a vocal minority inside the company is doing. There is a vocal minority inside Facebook that is belligerent beyond belief in a quest, I think, to implement social justice policies across our mission, basically.”

He added, “I think looking at the way the hate speech policy is implemented on the platform, you can’t even have conversations about that policy inside the company without having your character attacked. I’ve experienced this personally, being called a sexist or a racist or a transphobe, an Islamophobe. You can’t have conversations about anything that’s a tenet of the social justice ideology without being attacked personally. The real concerning thing that’s happening is that even though this is a minority of employees in the company, unfortunately, I’m not sure Facebook leadership knows how to push back against them. Like I said, they are unbelievably belligerent and demanding and hostile not just to other employees but toward Facebook leadership directly. My real concern is whether they can push back.”