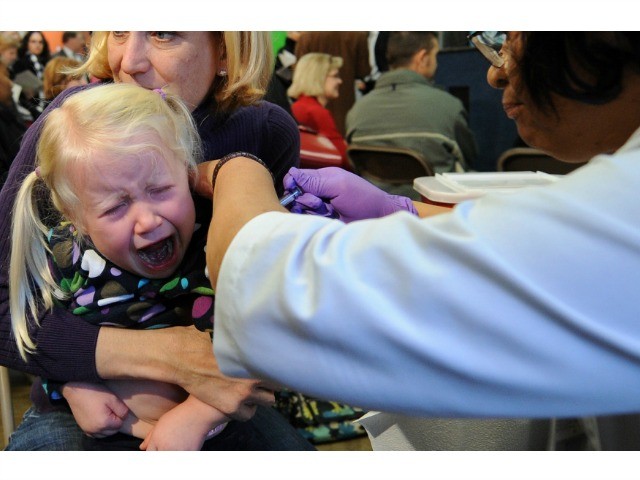 The Centers for Disease Control and Prevention (CDC) does not know exactly how many Americans die from the flu or flu-related illnesses, but the federal agency estimates that last year marks the highest estimated death toll in four decades — 80,000 people across the country.

Dr. Robert Redfield, director of the CDC, revealed the number recently to the Associated Press (AP) as the 2018-2019 flu season gets underway. And the number is not only record-breaking but almost twice as much as what health officials consider a bad season.

CDC officials do not have exact counts of how many people die from flu each year. Flu is so common that not all flu cases are reported, and flu is not always listed on death certificates. So the CDC uses statistical models, which are periodically revised, to make estimates.

Fatal complications from the flu can include pneumonia, stroke and heart attack.

CDC officials called the 80,000 figure preliminary, and it may be slightly revised. But they said it is not expected to go down.

To find as many flu-related deaths, you have to go back to the mid-1970s, but it is not the worst flu season by a long shot.

This year marks the 100th anniversary of the 1918 flu pandemic, which lasted almost two years and is estimated to have killed about 675,000 Americans and at least 50 million people worldwide.

The pandemic was so severe that from 1917 to 1918, life expectancy in the United States fell by about 12 years, to 36.6 years for men and 42.2 years for women. There were high death rates in previously healthy people, including those between the ages of 20 and 40 years old, which was unusual because flu typically hits the very young and the very old more than young adults.

The 1918 flu pandemic occurred during World War I; close quarters and massive troop movements helped fuel the spread of disease.

In September 1918, the second wave of pandemic flu emerged at Camp Devens, a U.S. Army training camp just outside of Boston, and at a naval facility in Boston. This wave was brutal and peaked in the U.S. from September through November. More than 100,000 Americans died during October alone. The third and final wave began in early 1919 and ran through spring, causing yet more illness and death. While serious, this wave was not as lethal as the second wave.

Despite the fact that no flu vaccine can completely prevent the virus from infecting or even killing people, officials encourage people to get one this year. The young and elderly are especially at risk, according to the CDC.

You can find more information here.