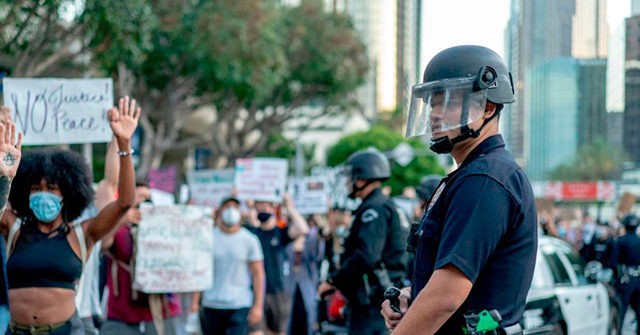 A restaurant in Port Richey, Florida, promised Thursday to be a place of refuge for law enforcement officers amid calls to defund the police.

“To all police officers, Sheriff deputies, marshall, or any law enforcement officer, The Local Fresh Grill will always be a safe haven for you, a place where you can come and enjoy your lunch knowing that I have your back,” the restaurant wrote on Facebook, according to WFLA.

The owners said officers should also know that while inside the restaurant, they would be shown “the respect they deserve,” and added that they still offered a 10 percent discount to law enforcement.

Amid calls to defund the police in the wake of George Floyd’s death, Pastor Darrell Scott said Wednesday during a hearing on Capitol Hill that the move would be “unwise” and “irresponsible.”

The prospect of defunding and/or dismantling of Police forces across the country is one of the most unwise, irresponsible proposals by American politicians in our nation history. It is nothing short of the politicizing of current social events, a reactionary measure that can result in short and long term damage to American society. … The criminal element in and of society would enjoy nothing better than a reduction in police presence and power.

Following his announcement to cut the New York Police Department’s (NYPD) budget, Mayor Bill de Blasio’s (D) wife, Chirlane McCray, said Tuesday that abolishing the NYPD would be “like a nirvana, a utopia that we are nowhere close to getting to,” according to Breitbart News.

However, Scott, who is the cofounder and CEO of President Donald Trump’s National Diversity Coalition, said defunding the police would only lead to a rise in crime.

“Defunding of police departments has already happened in a number of American Cities, and, rather than remedying problems, has actually made conditions much worse,” he stated.

Thursday, the Local Fresh Grill assured officers that not everyone was “fooled by all this propaganda and media exaggerations. We know that the majority of you are good people and put your lived [sic] on the line every day for us.”