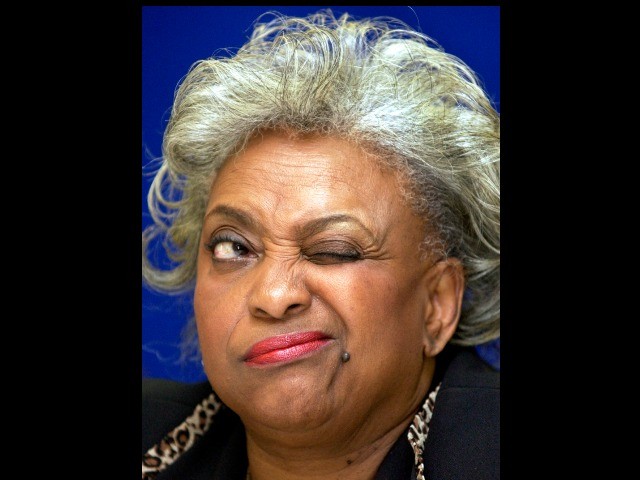 The Florida official put in charge of counting votes in Broward County — the most liberal county in the state — for the gubernatorial and Senate race previously destroyed voter ballots, a judge ruled, and was most recently accused of not removing dead voters from the voter rolls.

Broward County Board of Elections Supervisor Brenda Snipes is in charge of vote counting in the area and has yet to disclose how many ballots are still not counted despite the election for governor and Senate occurring two days ago.

Currently, in the Senate race, Republican Rick Scott is leading Democrat incumbent Bill Nelson by more than 20,000 votes. Nelson is hoping for a blowout in Broward County to push him over the edge for re-election.

Snipes was confronted by local media about why the vote count in Broward County has taken so long.

“Could I please get a moment to go into the room and find out?” Snipes asked the group huddled around her. “OK, when I come back I’ll let you know.”

“But, Dr. Snipes, it is now Thursday,” Weinsier said. “We are still counting ballots in Broward County.”

“We’re counting five pages or six pages for each of the people who voted,” Snipes said.

“But other counties have been able to do it,” Weinsier said.

In May, a judge ruled that Snipes had violated state and federal law after she destroyed voter ballots in the state’s 2016 congressional election. In the race, former Democratic National Convention (DNC) Chairwoman Rep. Debbie Wasserman Schultz won re-election by less than 7,000 votes against Democrat primary challenger Tim Canova.

The next year, when Canova asked to review the paper ballots in the race, it was revealed that Snipes destroyed the ballots only 12 months after the primary. Federal and state law mandates that ballots not be destroyed until 22 months after an election.

The case exposed that Snipes’ staff had opened ballots in private in 2016 on election day.

Just last year, Snipes’ office was taken to federal court by President Trump’s administration after being accused of keeping felons, noncitizens, and dead voters on the voter rolls in Broward County and at one point having more voters on the rolls than actual voters in the district.

Sen. Marco Rubio (R-FL) blasted the slow-moving vote counting in Broward County and the fact that Snipes — despite her scandals — is in charge of the process.

#Broward supervisor:
– says she doesn’t know how many ballots are left to be counted; &
– Isn’t reporting hourly or regularly,but rather releasing thousands of additional votes,often in the overnight hours,that are chipping away at GOP leads

#Broward elections department has a history of violating the law:

A court found they improperly handled votes by mail:https://t.co/NOE6qdbWly

Court found they destroyed ballots in 2016 in violation of state & federal law:https://t.co/ywP8qE46J5 #Sayfie

A U.S. Senate seat & a statewide cabinet officer are now potentially in the hands of an elections supervisor with a history of incompetence & of blatant violations of state & federal laws.