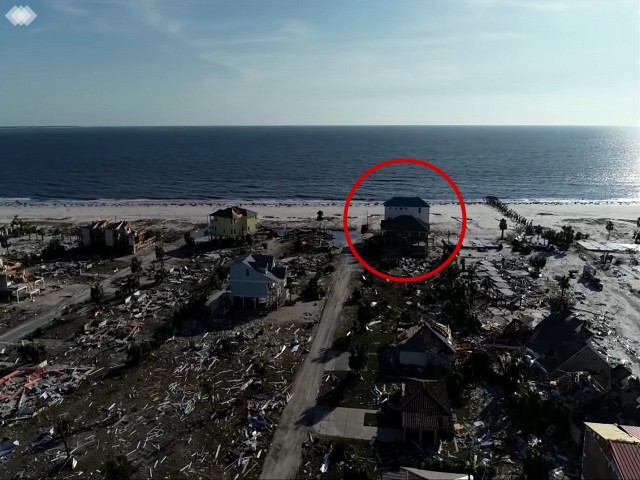 Dr. Lebron Lackey and his uncle Russell King say they built their Florida “Sand Palace” to “survive the big one” — and it did.

Hurricane Michael landed on Mexico Beach last week at Category 4, with 155-mile-per-hour winds. Most homes on the beach were torn down to their foundations by the catastrophic storm, but Lackey and King’s home was not only left standing but was visibly unscathed in the midst of a sea of rubble.

“At every point, from pilings to the roof and everything in between, when it came time to make a decision about what level of material or what to use, we didn’t pay attention to code,” Lackey told CNN. “We went above and beyond code, and we asked the question: ‘What would survive the big one?’ And we consistently tried to build it for that.”

What kind of house can stand up to the sort of brutality that turns a tourist destination into a wasteland? It began with 40-foot pilings buried in the ground, foot-thick concrete walls, and steel cables woven through the roof to keep it attached in the event of a massive storm just like this one. Lackey estimated that he and his uncle spent about 20 to 30 percent more for the upgrades but said they were “totally worth it.”

The home was built to withstand winds up to 250 mph. Only the stairs and materials on the ground floor were washed away by the surging water. The other homes were not remotely so fortunate. “I had already seen the pictures of destruction, but there was nothing like it first-hand. Before I made it to the house, I already had tears in my eyes for the community,” Lackey said.

Tens of thousands of residents continue to live without power. One thousand residents remain missing, and 19 deaths have already been confirmed at the hands of this deadly hurricane. As the shoreline begins its slow recovery, Lackey and King’s home remains a standing testament to human stubbornness.