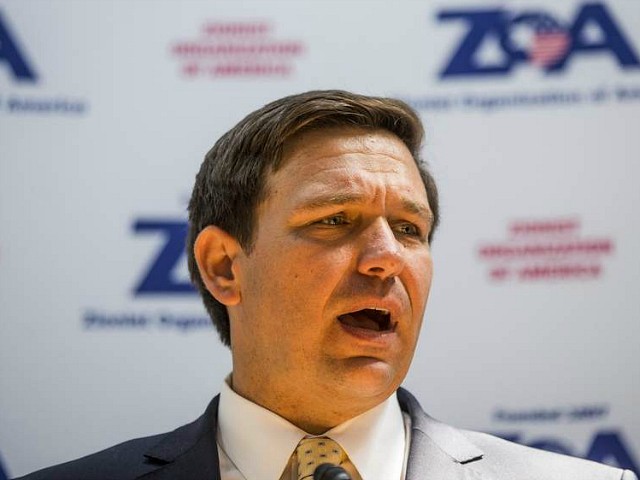 Gov. Ron DeSantis (R-FL) delivered his inaugural address as governor on Tuesday, pledging to continue Florida’s economic prosperity, support its environment, improve education, work with Congress to improve health care, and to stand by the promises that he campaigned on.

“It now falls to me to build upon the foundation that has been laid, navigate the challenges – economic, environmental, constitutional – that lie ahead, and steer Florida to a stronger, cleaner and safer future,” he said.

“Too many states have sought to match runaway public expenditures with ever-increasing levels of taxation. This creates a vicious cycle that leads productive citizens to flee, repels investment and leaves their people overburdened, with less opportunity to prosper, and badly damages the fiscal health of these states,” he said.

“Let’s promote a virtuous cycle whereby low taxes, a reasonable regulatory climate, a sensible legal system and a healthy environment attract jobs, business and investment – particularly in the areas of technology, manufacturing and finance,” he said.

“An expanding economic base will yield more high-paying jobs for our citizens and is the best way to generate the revenue needed for public priorities like education, protecting our natural resources and infrastructure,” he added. “We know what works and what doesn’t – let’s not veer off course.”

However, he said that Florida’s economic potential would be jeopardized if problems afflicting the environment and water resources were not solved.

“For Florida, the quality of our water and environmental surroundings are foundational to our prosperity as a state – it doesn’t just drive tourism; it affects property values, anchors many local economies and is central to our quality of life. The water is part and parcel of Florida’s DNA. Protecting it is the smart thing to do; it’s also the right thing to do,” he said.

On education, he said Florida should place a greater emphasis on vocational and technical training.

“There is honor in jobs that require vocational skills and those who work hard in these trades make great contributions to our society and should have our admiration,” he said. Skills-based education should also include training in computer science and technology, he said.

He also said Florida’s education system should also empower parents to make choices on the best possible school for their children.

“One size does not fit all. No family should be denied the opportunity for their child to succeed due to insufficient income or to living in the wrong zip code. And this opportunity must extend to every Floridian regardless of race, color or creed,” he said.

He also spoke of the need for civics education, to teach America’s “founding principles.”

“Their preservation is why so many Americans have laid down their lives in battles near and far. How can we ensure that government of the people shall not perish from the earth if we fail to provide all of our students with the foundational knowledge needed for properly discharging the duties of citizenship?”

He also said he hoped Congress would work with him to meet the health care needs of Floridians.

In no area is legislative initiative more needed than in the field of health care. The escalating cost of medical care, prescription drugs and health insurance has wreaked havoc on family budgets, priced many out of the market entirely, and has put significant stress on our state budget,” he said.

“The current system is riddled with perverse incentives, intrudes on the doctor-patient relationship and is mired in bureaucracy and red tape. The people of Florida deserve relief.”

DeSantis also vowed to appoint judges who will not legislate from the bench.

“To my fellow Floridians, I say to you: judicial activism ends, right here and right now. I will only appoint judges who understand the proper role of the courts is to apply the law and Constitution as written, not to legislate from the bench. The Constitution, not the judiciary, is supreme,” he said.

He also pledged to stand by Northwest Florida communities affected by Hurricane Michael in October.

“To the communities impacted, we will stand with you to rebuild your communities stronger than before,” he said.

“To our veterans and the men and women in our armed forces, Florida values not only your service in uniform, but also the contributions you make to our state,” he said. “To our men and women in law enforcement, I will stand with you to protect our communities.  You put your life on the line in defense of others; you deserve support, not condemnation.”

He said he would work with local and federal law enforcement partners to keep people safe, particularly at schools.

“We must never turn a blind eye to those who represent a danger to our schools and community; we cannot sacrifice the safety of our people at the altar of social experimentation,” he said.

He also pledged to stand for the rule of law, and not allow sanctuary cities.

“We will stand for the rule of law. We won’t allow sanctuary cities. And we will stop incentivizing illegal immigration, which is unfair to our legal immigrants, promotes lawlessness and reduces wages for our blue-collar workers,” he said.

He also pledged to improve voting systems, amidst reports of fraud in the November elections.

“We also cannot allow Florida’s reputation to be further tarnished by the repeated failure of a small number of counties to conduct elections in a transparent, lawful manner. A generation of botched elections is enough,” he said.

“Let there be no misunderstanding,” he said. “As governor, I will lead with purpose and conviction on behalf of the people of Florida.

“If the Legislature engages in wasteful spending, I will veto it. If a local official is neglectful of required duties, I will remove the official. If our environment is threatened, I will move to protect it. Leadership requires decisive action. After all, ‘If the trumpet sounds an uncertain note, who shall prepare for battle?’”