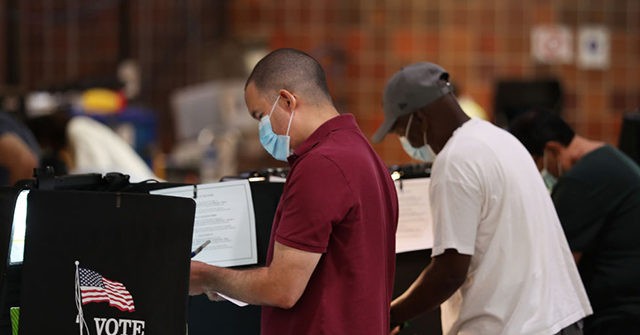 According to Politico, Democrats hold a “significant pre-Election Day lead, built by a more than 450,000 vote-by-mail lead, through Monday, but Republicans insist they are just ‘cannibalizing’ their in-person vote.”

“Put another way, they say Democrats are not gaining additional voters, but that voters in candidate Joe Biden’s party are just changing how they participate because of Democrats’ greater emphasis on voting by mail during a global pandemic,” the outlet reported.

Notably, Democrats currently hold the slimmest lead in voter registrations in Florida, as Republicans have made consistent gains over the years. Data from the state Division of Elections shows Democrats with a narrow 134,242 voter lead — 5,303,254 active registered voters to the GOP’s 5,169,012. Republicans have added 444,922 voters to the Democrats’ 298,090 since 2016, as Breitbart News detailed:

Why is that huge?

This is not good news for @JoeBiden.

According to the Florida Division of Elections data, Democrats edged out Republicans in early voting in 2016, comprising 1,580,003 of the 3,874,929 voters statewide who cast their ballots early. Republicans accounted for 1,425,309 of that total.

Trump just came off a campaign blitz in Florida, followed by Sen. Kamala Harris (D-CA), who visited the state on Monday to mark the first day of early voting. During a stump speech in Orlando, Harris said Trump and his allies are trying to “confuse people about the integrity of our voting system, trying to suggest that you can’t trust it” and accused them of attempting to “deflate our enthusiasm.”

She told voters at the drive-in rally that “powerful” people are “trying to suggest we can’t trust the system, putting in place laws designed to suppress the vote, trying to purge the voter rolls, [and] trying to make it difficult.”

“Why are they doing that? Because they know when we vote, we win,” she concluded.

The results in Florida could very well come down to voter turnout, which stood at 75 percent in 2016. With two weeks to go, early voting and vote-by-mail numbers appear to be outpacing the numbers garnered in the same time period four years ago.