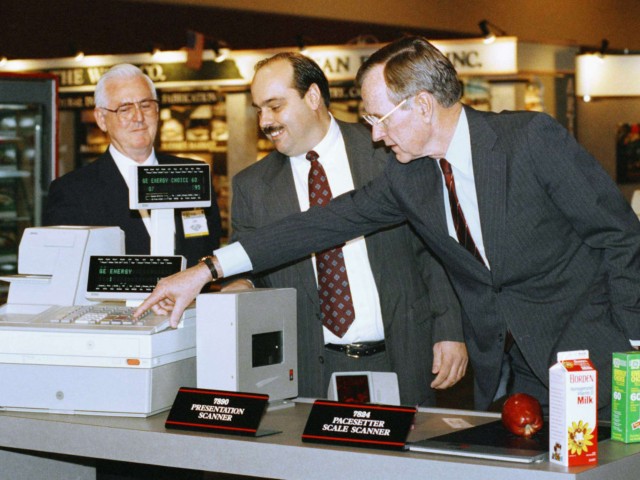 Over the next week or so, with the passing of former President George H.W. Bush, you are about to witness a whole lot of phony respect emanating from the establishment media. Don’t you believe it.

While the media have not always been as open about their seething hatred of Republicans who hold power as they are nowadays, that hatred has always been there.

For example, some 33 years ago, Leslie Stahl of CBS was race-baiting the former president when he was Ronald Reagan’s vice president. And seven years later, after 12 years of Republican rule, the media were even more desperate to destroy this man.

Already aiding the media was a shallow recession. After Reagan/Bush saved our economy, lifted it out of double-digit unemployment, interest rates, and inflation; after they ushered in what would become the greatest economic peacetime expansion in history, we were hit with a cyclical recession that would already be over by Election Day. None of that mattered to the media, though. To destroy Bush they did everything in their power to smear him as an out of touch blue blood, even if it meant fabricating a bald-faced lie, which they did about a grocery store scanner.

On February 5, 1992, Bush had already launched his re-election bid. Looking for a photo-op, he visited the National Grocers Association in Orlando, Florida, where he was given a demonstration involving the latest grocery scanning technology.

Here is how the national media lied about the moment:

The far-left New York Times, of course, led with the coverage on its front page with the headline: “Bush Encounters the Supermarket, Amazed,” and described it this way:

Then he grabbed a quart of milk, a light bulb and a bag of candy and ran them over an electronic scanner. The look of wonder flickered across his face again as he saw the item and price registered on the cash register screen.

“This is for checking out?” asked Mr. Bush. “I just took a tour through the exhibits here,” he told the grocers later. “Amazed by some of the technology.”

The media’s propaganda campaign, of course, was to try and make Bush look so out of touch, so elitist and unable to relate to the common man’s problem, that, like a time traveler from the Victorian Age, he had never encountered a grocery store scanner before.

To begin with, some of the technology actually was new. Even the left-wing Snopes, who declared this entire narrative “false,” points out that Bush “wasn’t being shown then-standard scanner technology, but a new type of scanner that could weigh groceries and read mangled and torn bar codes.”

Even worse, though, is the fact that the Times reporter, Andrew Rosenthal, had not even been there. He was reading it off a pool report, and the pool reporter found the moment so insignificant, he did not even write about it in his own story about the photo-op.

From there, naturally, the fake news about Bush being awed by everyday technology exploded throughout almost all of the establishment media.

At the time, though, some did defend Bush with the truth. Snopes points out:

Newsweek screened the same tape and reported: “Bush acts curious and polite, but hardly amazed.” Michael Duffy of Time magazine called the whole thing “completely insignificant as a news event. It was prosaic, polite talk, and Bush is expert at that. If anything, he was bored.” And Bob Graham of NCR, who demonstrated the scanner technology for President Bush, said, “It’s foolish to think the president doesn’t know anything about grocery stores. He knew exactly what I was talking about.”

Nevertheless, it was not enough. The media lie stuck and long after the campaign was over, long after Bush had left office, the media continue to push this phony urban legend. Here’s Chris Matthews during his Sunday show, which launched ten years after Bush left office.

Oddly enough, in the second season of House of Cards, there is a scene where a journalism professor is explaining the difference between facts and narrative to her students, and she uses the media’s grocery scanner lie as an example.

I don’t want to make it sound as though Bush lost his re-election campaign due only to this. The economy was a problem, as was 12 years of the same administration, as was Pat Buchanan’s insurgent campaign primary challenge, as was Ross Perot, as was Bush breaking his famous “No new taxes” pledge. And let’s not forget Bill Clinton was young and vibrant, an enormously gifted campaigner, and a moderate Southern Democrat.

Even with all those headwinds, though, going into the campaign’s final week, Bush was surging. Then, on the Friday before Election Day, Iran-Contra independent counsel Lawrence Walsh indicted former Defense Secretary Caspar Weinberger on a process crime (sound familiar?) for making a false statement all the way back in 1987.

In other words, the media have always been a  left-wing fake news factory populated with liars filled with rage and hate.