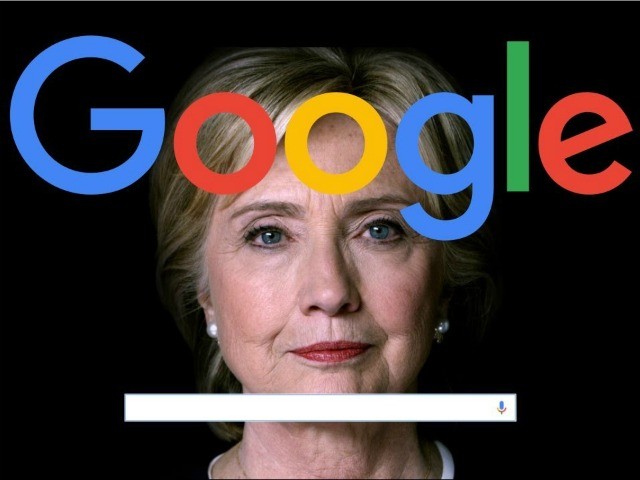 Following accusations of Google’s bias against conservatives, Breitbart News continues to unearth compelling evidence of that bias, including the 2014 appearance by Hillary Clinton at Google HQ, where she was praised and treated as the next President of the United States.

Around the same time that Google parent company Alphabet’s Executive Chairman at the time, Eric Schmidt, was jockeying for position to act as “head outside advisor” to Hillary Clinton’s presidential campaign, Clinton was invited to speak at Google’s headquarters where she was fawned over by both Schmidt and the audience. Clinton was treated as if she was the next President of the United States, with Schmidt asking if her husband Bill Clinton would be referred to as the “First Laddie” or simply “Bill.”

The talk was meant to be about Clinton’s book Hard Choices. At around 53 minutes into the talk, Clinton says “there’s recent research that’s been done and I would welcome any of your thoughts on this — that shows if you hold an opinion strongly, like let’s just pick supply-side economics, trickle-down economics which don’t work; there’s no evidence that it works, but it is deeply believed by people.”

Clinton continues: “Or that immigration is bad for the United States. Totally wrong;  evidence to the contrary, going out for miles,” Clinton is then interrupted by Schmidt who states: “Can we just pause? Like, isn’t that amazing, that we just heard this?” As the crowd applauds this statement Schmidt says: “this country was built on immigration,” to which Clinton agrees stating “one hundred percent!”

About an hour into the talk Schmidt states: “so, Secretary Clinton we have a way of asking people during the audience what the most important question is. And when you became First Lady, your name was determined by the tradition of ‘First Lady.’” Clinton replied: “True.”

Schmidt continued: “And Googlers want to know the following question. They want to know the name of President Clinton in a scenario where there’s another President Clinton.” Clinton and the audience laugh before Schmidt continues: “Googlers have indicated that there are two choices. The first one is “Bill.” So it would be “Ms. President and Bill.” which would have a certain gender equality, you know, “Mr. Clinton the First Lady.” And the second one is ‘First Laddie.’”

Schmidt then held a vote by show of hands for the title that Bill Clinton would receive if Hillary was made President, the audience decided on “First Laddie.”

All of this goes to show the closeness between Clinton, Schmidt, and Google overall. It was around this same time that Clinton’s campaign chairman wrote in leaked emails: “I met with Eric Schmidt tonight. As David reported, he’s ready to fund, advise recruit talent, etc. He was more deferential on structure than I expected. Wasn’t pushing to run through one of his existing firms. Clearly wants to be head outside advisor, but didn’t seem like he wanted to push others out.”

And Breitbart News’ latest scoop has shown that the same bias still appears to exist within Google beyond the 2016 election.