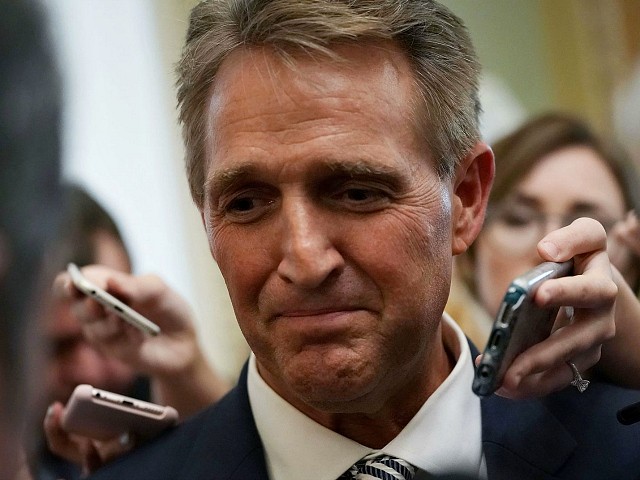 WASHINGTON, DC – Outgoing Never Trump Sen. Jeff Flake (R-AZ) is voting against all judicial nominees unless he gets a vote on legislation to protect Robert Mueller, scuttling 21 upcoming Senate Judiciary Committee (SJC) votes, requiring Vice President Mike Pence to break ties for some nominees already on the Senate floor, and requiring all others to be re-nominated in 2019.

Although Sen. Flake has long been at odds with conservative Republicans, on Wednesday he crossed a new line by following through on a threat to vote against all judicial nominees.

One of President Donald Trump’s greatest successes has been an impressive array of exceptionally well-qualified nominees for judgeships, and many thought that, for all of his rhetoric, Flake would not vote against judges with stellar credentials, unblemished character, and a commitment to interpreting the Constitution according to its original public meaning.

Flake had threatened to torpedo judges unless Congress voted on legislation to prevent the firing of Special Counsel Mueller. Many legal scholars now agree that such legislation is unconstitutional for the reasons Justice Antonin Scalia explained in his famous dissent in Morrison v. Olson (1988), with liberal Justice Elena Kagan saying that Scalia’s dissent “gets better every time you read it.”

Restricting a president’s ability to fire a federal prosecutor violates the Executive Vesting Clause of Article II of the Constitution, which gives the president all law enforcement power in the federal government.

However, Flake threatened that unless lawmakers voted on such legislation, he would henceforth vote against all judicial nominees. Apparently he was serious.

In fact, Flake voted on Wednesday to filibuster a conservative nominee already on the Senate floor, Thomas Farr, who is nominated to be a federal district judge in North Carolina. Vice President Pence had to come to the Senate to exercise his constitutional power to break tie votes, invoking cloture 51-50. Pence’s vote will likely be required again to finally confirm Farr this week.

Flake’s defection makes it impossible for the SJC to vote on judicial nominations with its current 11-10 partisan makeup. The Senate can technically bypass the committee process, but that is considered beyond the pale from the practical perspective.

With Flake voting no, this means that six nominees for the powerful U.S. courts of appeals and 15 nominees for federal district courts — where trials are conducted — cannot make it out of committee.

One of those nominees is Bridget Shelton Bade, recommended by Flake to President Trump for a seat on the U.S. Court of Appeals for the Ninth Circuit.

It also means that Pence’s tie-breaking vote would be needed to confirm the nominees who have been voted out of SJC and are currently pending on the Senate floor. While it is possible that Sen. Joe Manchin (D-WV) may vote for some or even most of these nominees, and perhaps other Democrats might vote for several, for others Pence would be the last resort.

But with Democrats forcing a cloture vote on almost all judicial nominees, and with Senate rules allowing up to 30 hours of debate after cloture, supporters of conservative judges are frustrated with the limited number of hours available to confirm judges. Some commentators note that the amount of time being spent on prison reform could instead result in more life-tenured judges and note that Grassley’s determination to pass the legislation is consuming many of those hours. There appears to be a tug of war over priorities amongst Senate Republicans.

The Senate is 51-49 until January 3, when it comes 53-47. From judicial confirmations’ standpoint, though, it is much better than that. Flake lost his seat to liberal Democrat Kyrsten Sinema, but obviously Flake was never a reliable vote. Outgoing Sen. Dean Heller (R-NV) generally supported conservative judges and was much more reliable than Flake, but he had a moderate streak.

All in all, President Trump should have a working majority to confirm his judicial nominees for the first time in his presidency.

For nominees who are stalled in committee after Flake’s flip-flop, President Trump will have to re-nominate them in January 2019. They must go through the committee process and then proceed to the Senate floor, with confirmations in March at the earliest, but with some possibly waiting until April or May.

Overall, President Trump has already confirmed an all-time two-year record of 29 federal appellate judges. Those numbers could climb with some floor votes on pending nominees. The rest may have to wait until 2019.