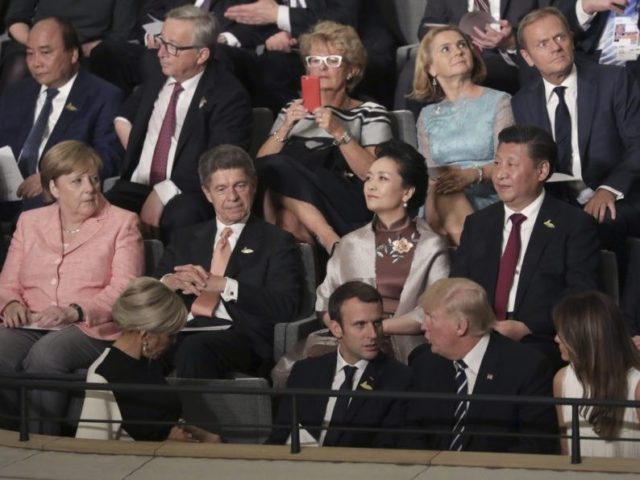 The G-20 summit in Buenos Aires, Argentina, on Friday and Saturday could be the scene of a few momentous encounters as world leaders meet – or refuse to meet – and major strategic conflicts play out. Here are five things to watch for as the summit unfolds.

Trump and Putin: The possibility of a meeting between U.S. President Donald Trump and Russian President Vladimir Putin was suddenly catapulted to the foreground of G-20 drama on Thursday when Trump canceled a long-planned meeting between them in Buenos Aires due to Russia’s attack on Ukrainian ships last weekend.

President Trump made this declaration on Twitter while Air Force One was en route to Argentina, just hours after the Kremlin insisted the meeting was still on, and Trump himself seemed willing to sit down with Putin. White House Chief of Staff John Kelly, Secretary of State Mike Pompeo, and National Security Adviser John Bolton were reportedly involved in helping the president make his decision to snub Putin.

It remains possible the two leaders will meet in some manner during the summit. Trump’s announcement held open the possibility that Putin could make the meeting happen by releasing the Ukrainian ships and sailors in Russian custody, an action demanded by much of the international community. Putin would probably view such eleventh-hour capitulation as a display of weakness, even if the release was engineered by a Russian court abruptly deciding the Ukrainians have spent enough time in detention.

German Chancellor Angela Merkel vowed on Thursday to confront Putin about his naval hostility towards Ukraine while she is in Argentina. Putin could face demands from several quarters at the G-20 summit to release the captive Ukrainians and dial back tensions around the Crimean peninsula. The summit could also be the backdrop for Russia, Ukraine, or other parties to take actions that either defuse or intensify the crisis.

The U.S.-China trade war: Before the Russia-Ukraine conflict grabbed the spotlight, the most anticipated confrontation at the G-20 summit was the U.S. and China either settling, ameliorating, or ratcheting up their trade war.

The Trump administration characterized China’s overtures in advance of the summit as disappointing, particularly in the vital areas of Chinese technology theft and predatory trade practices. President Trump departed for Argentina striving to project both unshakeable determination to continue the trade war as long as necessary and willingness to make a deal with Chinese Communist Party leader Xi Jinping.

If a deal is not made, Trump has indicated tariffs could expand dramatically, perhaps doubling the total volume of affected goods. In addition to following Presidents Trump and Xi, analysts will be carefully watching White House trade adviser Peter Navarro, the paramount China hawk whose seat aboard Air Force One was taken as a significant omen.

Chinese state-run media on Thursday signaled a deal between Trump and Xi is possible, provided the U.S. is prepared to be “fair-minded” and avoid temptations such as “taking advantage of the trade spat to throttle Chinese growth.”

Pessimistic analysts doubt Xi will offer a deal good enough to pique Trump’s interest, pointing to rancor at the recent APEC summit in Papua New Guinea as a sign the United States and China remain far apart on both trade and the larger strategic relationship between the two superpowers. The economic news for China has been worse than in the U.S. of late, which will probably inspire President Trump to drive a hard bargain, especially since a slowdown in the Chinese economy benefits the strategic interests of the United States and its Pacific allies.

Saudi Arabia and the Khashoggi aftermath: British Prime Minister Theresa May said on her way to the G-20 summit that she intends to press Saudi Crown Prince Mohammed bin Salman (MBS) about the murder of writer Jamal Khashoggi at the Saudi consulate in Istanbul in October, and about the humanitarian ramifications of the Saudi-led military intervention in Yemen’s civil war.

The New York Times on Thursday called the G-20 summit “the first test of the 33-year-old crown prince’s ability to retain his status as an international statesman” in the wake of the Khashoggi murder. That test could turn into a pop quiz if Argentinian prosecutors decide to indict bin Salman for crimes against humanity, as activists urged this week.

The Atlantic speculated MBS will pass his global test in Buenos Aires because Saudi Arabia is too strategically and economically important to be turned into a pariah state, and because quite a few of the G-20 members kill and imprison journalists on a regular basis themselves.

The future Saudi king’s reception over the course of the summit will be an important clue on if he, and the kingdom, can weather the storm over Khashoggi and Yemen – which suddenly became a front-burner issue when fallout from Khashoggi’s death was seen as weakening Saudi Arabia politically and energizing its critics.

Other leaders seen as insufficiently tough on MBS, prominently including President Trump, can expect sustained criticism for indulging the Khashoggi murder. Indian Prime Minister Narendra Modi teed himself up to be first on the firing line by holding what he described as a “fruitful interaction” with the Saudi crown prince after they both arrived in Argentina on Thursday.

One G-20 attendee who probably will not stand accused of going soft on Saudi Arabia is Turkish President Recep Tayyip Erdogan. Erdogan also has his differences with the United States; Thursday saw some confusion over whether Presidents Trump and Erdogan will meet on the sidelines of the summit. Relations between the U.S. and Turkey appeared to be on the mend following Turkey’s release of American Pastor Andrew Brunson but soured again after the murder of Khashoggi.

Iran sanctions: Closely tied to the controversy surrounding Crown Prince bin Salman are the sanctions leveled by the United States against Saudi Arabia’s nemesis Iran. Many G-20 members have expressed opposition to the sanctions or made plans to circumvent them.

The sanctions are a significant source of tension between the U.S. and Europe, which wishes to continue doing business with Tehran and keep the nuclear deal arranged by former President Barack Obama alive.

The Iran sanctions naturally had a significant effect on the world oil market. Oil prices are expected to be a major topic of discussion at the G-20 meeting, possibly foreshadowing the outcome of a major OPEC meeting in December. President Trump will doubtless take the opportunity to press oil-producing G-20 nations to keep output up and prices low. The political weakness of Saudi Arabia will give Trump plenty of leverage to convince them to keep the oil spigots wide open. This will, in turn, have a major effect on Iran’s precarious economy.

France and Germany have been working on creating an alternative trade mechanism that would allow them to continue dealing with Iran without inviting retribution from the United States. The project does not have as many takers as its architects hoped, so the G-20 summit will provide a last-ditch opportunity to recruit participants. If that recruiting effort does not go well, the French and Germans themselves might become nervous about proceeding with the project, at least on the scale originally envisioned.

President Trump can work the sidelines of the G-20 to convince more world leaders that Iran is dangerous and the nuclear deal is not worth saving. To this end, the Pentagon introduced more evidence on Thursday that Iran is providing militants in Yemen and Afghanistan with weapons.

Brexit: Prime Minister May plans to tout her Brexit deal at the G-20 and explain how it will benefit the global economy. She can expect a hard sell with President Trump, who worried on Monday that the deal could interfere with bilateral trade between the U.S. and Britain, and chided May for giving away too much to the European Union.

May is still struggling to sell the deal in her own country ahead of a crucial parliamentary vote on December 11. The reception she gets from other G-20 leaders in Buenos Aires might have a significant impact on her dicey political fortunes back home. Conversely, perceptions of May’s political weakness will influence how other summiteers approach her.

Keenly interested in how May fares at the summit will be the 3,400 residents of the Falkland Islands, whose economy could melt down if Britain exits from the European Union without a deal that preserves certain benefits crucial to the Falklands. Argentinian officials have openly stated a desire to press their claim on the Falklands if Brexit presents them with an opportunity to do so.