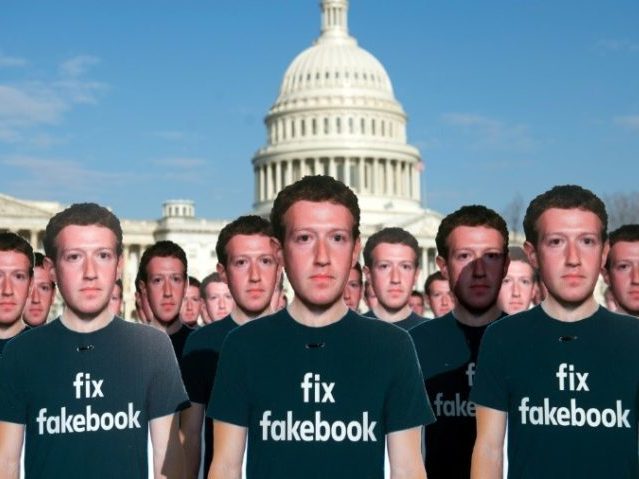 The New York Times published an article Wednesday which alleges that Facebook engaged in a number of practices designed to hurt competitors and direct media and government attention anywhere else they could — including George Soros.

A recent article published by the New York Times titled “Delay, Deny and Deflect: How Facebook’s Leaders Fought Through Crisis,” provides insight into how Facebook has operated through numerous crises over the past few years. The report also alleges that Facebook hired a PR firm which published articles critical of Facebook’s competitors through an associated conservative news website. Facebook also reportedly hired a Republican opposition research firm to discredit activist protesters critical of Facebook’s data breaches. This was done partly by linking them to the left-wing financier George Soros.

Here are some of the key takeaways from the New York Times report:

Following the Cambridge Analytica user data breach in which the personal data of millions of users was allegedly left vulnerable, Facebook attempted to discredit those that were critical of the company’s practices — by linking them to billionaire left-wing financier George Soros, known for funding a number of far-left groups. The article states:

While Mr. Zuckerberg has conducted a public apology tour in the last year, Ms. Sandberg has overseen an aggressive lobbying campaign to combat Facebook’s critics, shift public anger toward rival companies and ward off damaging regulation. Facebook employed a Republican opposition-research firm to discredit activist protesters, in part by linking them to the liberal financier George Soros. It also tapped its business relationships, lobbying a Jewish civil rights group to cast some criticism of the company as anti-Semitic.

In Washington, allies of Facebook, including Senator Chuck Schumer, the Democratic Senate leader, intervened on its behalf. And Ms. Sandberg wooed or cajoled hostile lawmakers, while trying to dispel Facebook’s reputation as a bastion of Bay Area liberalism.

In October 2017, Facebook began to increase the level of work for Definers Public Affairs — a PR group originally been to monitor press coverage of the company — undertakes for the company. Tim Miller, a former spokesman for Jeb Bush and one of the founders of Definers, previously stated in an interview that a goal for tech firms should be to “have positive content pushed out about your company and negative content that’s being pushed out about your competitor.”

And that’s exactly what Definers did for Facebook. The article states:

On a conservative news site called the NTK Network, dozens of articles blasted Google and Apple for unsavory business practices. One story called Mr. Cook hypocritical for chiding Facebook over privacy, noting that Apple also collects reams of data from users. Another played down the impact of the Russians’ use of Facebook.

The rash of news coverage was no accident: NTK is an affiliate of Definers, sharing offices and staff with the public relations firm in Arlington, Va. Many NTK Network stories are written by staff members at Definers or America Rising, the company’s political opposition-research arm, to attack their clients’ enemies. While the NTK Network does not have a large audience of its own, its content is frequently picked up by popular conservative outlets, including Breitbart.

In 2015, Donald Trump called for a shutdown of Muslim immigration following a series of Islamic terrorist attacks across the globe. This apparently upset Mark Zuckerberg who runs an immigration-based nonprofit organization, and the CEO questioned whether Trump’s comments broke Facebook’s terms of service:

Mr. Zuckerberg, who had helped found a nonprofit dedicated to immigration reform, was appalled, said employees who spoke to him or were familiar with the conversation. He asked Ms. Sandberg and other executives if Mr. Trump had violated Facebook’s terms of service.

The question was unusual. Mr. Zuckerberg typically focused on broader technology issues; politics was Ms. Sandberg’s domain. In 2010, Ms. Sandberg, a Democrat, had recruited a friend and fellow Clinton alum, Marne Levine, as Facebook’s chief Washington representative. A year later, after Republicans seized control of the House, Ms. Sandberg installed another friend, a well-connected Republican: Joel Kaplan, who had attended Harvard with Ms. Sandberg and later served in the George W. Bush administration.

Facebook surprisingly came out in favor of a bill proposed in November 2017 that would make Internet giants responsible for sex trafficking happening on their platforms. Facebook’s decision to support the bill was apparently not due to some altruistic desire to do good, but rather to make their competitor, Google, look bad for publicly disagreeing with the bill.

Google and others had fought the bill for months, worrying it would set a cumbersome precedent. But the sex trafficking bill was championed by Senator John Thune, a Republican of South Dakota who had pummeled Facebook over accusations that it censored conservative content, and Senator Richard Blumenthal, a Connecticut Democrat and senior commerce committee member who was a frequent critic of Facebook.

Facebook broke ranks with other tech companies, hoping the move would help repair relations on both sides of the aisle, said two congressional staffers and three tech industry officials.

When the bill came to a vote in the House in February, Ms. Sandberg offered public support online, urging Congress to “make sure we pass meaningful and strong legislation to stop sex trafficking.”

Democratic Senate leader Chuck Schumer reportedly lobbied Senator Mark Warner (D-VA) to stop criticizing Facebook and focus on tackling the issue of“right-wing disinformation,” across the internet. It should be noted that Schumer’s daughter Alison, works for Facebook as a product marketing manager. Open Secrets also notes that Schumer received $38,900 from the company in 2016.

In July, as Facebook’s troubles threatened to cost the company billions of dollars in market value, Mr. Schumer confronted Mr. Warner, by then Facebook’s most insistent inquisitor in Congress.

A Senate aide briefed on the exchange said that Mr. Schumer had not wanted Mr. Warner to lose sight of the need for Facebook to tackle problems with right-wing disinformation and election interference, as well as consumer privacy and other issues.

Read the full report in the New York Times here.