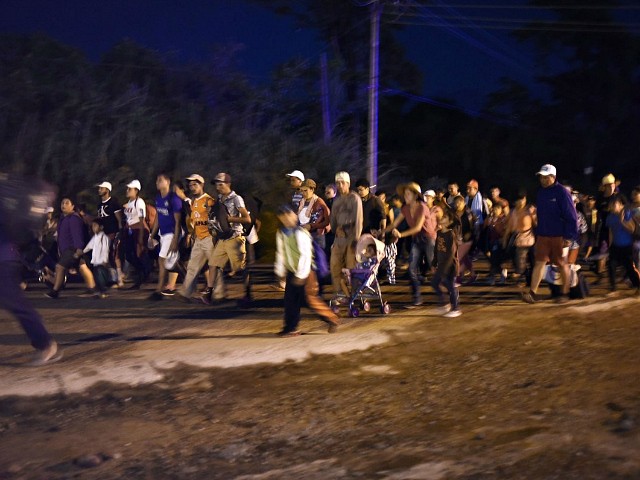 Between Honduras and Mexico, Guatemala has been overrun with the onslaught of migrants that began their journey last week in the northern Honduran city of San Pedro Sula. At last count around 7,000 have participated in the trek, a great deal of them rowdy, angry men ages 17 to 40. President Jimmy Morales has ordered the military and police to detain all of the migrants and facilitate their safe return back to Honduras, though thousands have already reached the Mexican border. In a morning interview with Judicial Watch at the Guatemalan Ministry of Defense, Secretary of Defense General Luis Miguel Ralda Moreno said more than 2,000 Hondurans have been sent back home on buses. “We’re doing everything possible to stop the caravan while still respecting human rights,” General Moreno said.

During an afternoon interview at the National Palace, President Morales said that Guatemala has absorbed the huge cost of mobilizing police and military to return thousands of people to Honduras. He would like the United States to help him find the organizers of the caravan so they can face legal consequences. “Mass immigration like this endangers lives,” Morales said. “This is unprecedented. We are in the process of investigating who is behind the caravan.” Morales assures that Guatemala is doing everything possible to curb illegal immigration and asked for cooperation from the United States.

It has been a delicate and complicated task, Guatemalan officials say, because the caravan is a very organized movement that has been well orchestrated. There are rest points along the route with food, water and shelter for the migrants as well as medical care in some areas. “It’s very strategic and extremely organized,” a Guatemalan government source told Judicial Watch. “It is very complex, not a simple march. There is nothing spontaneous about it.” During a visit to the Guatemalan-Honduran border this week Judicial Watch interviewed multiple migrants who repeated the same rehearsed line when asked who organized the caravan, insisting it was a spontaneous event even though there were clearly organizers shouting instructions in Spanish and putting select persons in front of cameras for interviews. All of them said the caravan was not about politics but rather poverty.

Guatemalan officials disagree, estimating that the caravan is a movement of radicalized forces to destabilize Central American countries. Honduran President Juan Orlando Hernández, a conservative, echoes that assessment. In a local newspaper report published last week Hernández asserted that leftist interests seeking to destabilize the country are manipulating migrants. Women and children are being used without regard to the risks to their lives, Hernández said. “The irregular mobilization was organized for political reasons to negatively affect the governance and image of Honduras and to destabilize the peace of neighboring countries,” the president said, adding that many have returned to the country after realizing they’ve been fooled.