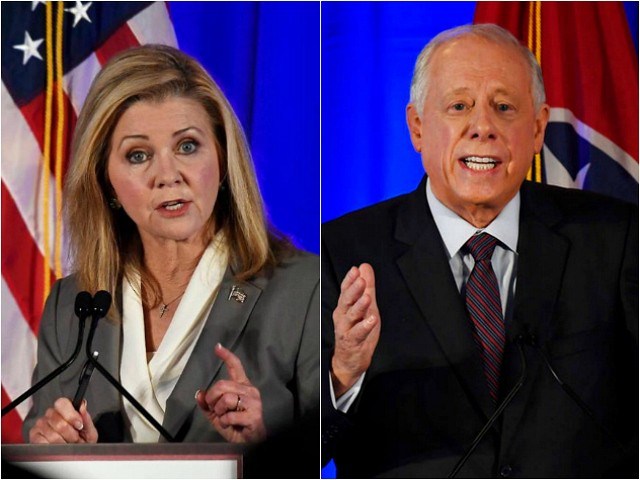 As recently as a month ago, the Real Clear Politics Average of Polls showed the race as a statistical tie.

But Bredesen has stumbled badly over the past several weeks, and Blackburn has benefited from her steadfast support of President Trump, who headlined a rally attended by an estimated 12,000 people in Chattanooga on Sunday night to support her candidacy.

On October 2, the Real Clear Politics Average of Polls showed the race to be dead even, with each candidate receiving  46.5 percent of the vote.

That jump in the polls tracks very closely with the release of the first polls conducted after the dramatic testimony before the Senate Judiciary Committee by Dr. Christine Blasey Ford on September 27, who alleged, without providing any corroborating evidence, that Supreme Court nominee Judge Brett Kavanaugh had sexually assaulted her 36 years earlier. Kavanaugh emphatically denied those allegations in testimony before the committee later that day.

In contrast to Blackburn, who announced her unwavering support for Kavanaugh on July 9, the day he was nominated by President Trump, and vigorously defended him throughout the confirmation process, Bredesen remained silent throughout almost that entire period of time.

Only on October 5, the day before the final vote when the U.S. Senate confirmed Kavanaugh by a 50 to 48 margin, did Bredesen announce his tepid support for Kavanaugh, a statement that many Tennessee voters believed at the time was an insincere effort to appeal to Republicans.

That perceived insincerity was confirmed by a Project Veritas undercover video released on October 10 which showed Bredesen campaign staffers stating unequivocally that Bredesen did not really support Kavanaugh and only issued a statement of support to win Republican voters.

Bredesen’s truthfulness also took a big hit with Tennessee voters when he claimed that, if elected, he would not support Senate Minority Leader Chuck Schumer (D-NY) to be the leader of Senate Democrats. That claim did not pass the smell test with many voters in Tennessee, given that Schumer personally recruited Bredesen to run for the Senate in Tennessee, has hosted fundraisers for him in New York City, and has spent more than $12 million to support his candidacy and oppose Blackburn through his Senate Majority PAC.

Bredesen’s latest stumble on the campaign trail came last week when he laughingly claimed that the migrant army of several thousand Hondurans currently marching through Mexico, intent on entering the United States illegally, do not represent a national security threat.

Bredesen is counting on two things to pull off an upset on Tuesday: (1) the sheer volume of spending by his campaign and Schumer’s Senate Majority PAC on behalf of his candidacy, and (2) an increased turnout from younger voters, energized by pop superstar Taylor Swift’s endorsement of his candidacy.

Most political observers in Tennessee are skeptical that will be enough for Bredesen, who has already told MSNBC that if he loses, it will be because of the failing national Democrat brand.