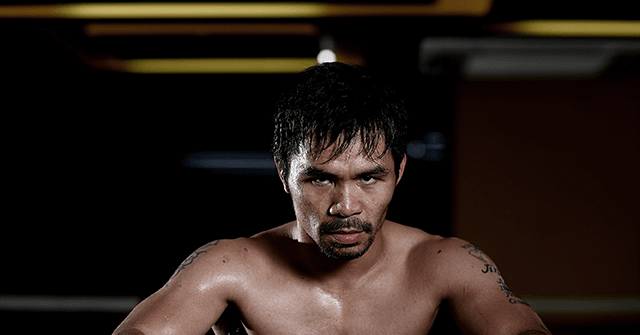 Sen. Pacquiao, a legendary and still-active fighter who is the only boxer to win 12 major world titles across eight separate weight divisions, issued the following challenge to the “cowards” perpetrating crimes against Asians via his official Twitter account on April 1: “Stop attacking Asians who can’t defend themselves. Fight me instead!”

We have one color in our Blood! Stop discriminating. LOVE AND PEACE TO EVERYONE!! #StopAsianHate pic.twitter.com/RuLtXraCQQ

The senator, who is tipped to run for the Philippine presidency in 2022, shared the message on his Twitter account via four different posters written in English, Filipino, Chinese, and Korean. The graphic posters depict Pacquiao surrounded by several Asian victims of recent physical assaults in the U.S. The images include a screenshot of an attack on a 65-year-old Filipina woman in New York City on March 29, which was captured on nearby security cameras, as well as a photo of the man later charged for the assault, convicted murderer Brandon Elliot, 38.

The posters also included a screenshot of a suspect wanted for allegedly slashing Filipino-American Noel Quintana in the face with a boxcutter on the New York City subway on February 3. Quintana, 61, survived the incident but suffered various injuries to his face, which required 100 stitches to close the wound. The suspect in the face slashing remains at large, according to the New York City Police Department (NYPD).

🚨WANTED for an ASSAULT:On 2/3/21 at approx.8:27 AM,on a Manhattan bound “L” 🚂 The suspect slashed a 61 year old male victim on the right cheek with a box cutter causing physical injuries.Any info call or DM NYPDTips at 800-577-TIPS.Reward up to $2,500. @NYPDDetectives @NYPDShea pic.twitter.com/Uk9f8rVMzt

“Anyone with information about the incident is asked to call the NYPD’s Crime Stoppers Hotline at 1-800-577-TIPS (8477). The public can also submit tips on the CrimeStoppers website at WWW.NYPDCRIMESTOPPERS.COM or on Twitter @NYPDTips. All calls are strictly confidential,” the police department added.

The Philippine Embassy in the U.S. urged Filipinos residing in America to “exercise utmost caution” on February 26 due to a “rise in attacks on Asian Americans” in various states.

“Filipinos are advised to exercise utmost caution in view of these incidents,” the Embassy said in a statement. “Those who experience attacks are advised to immediately call 911 to report incidents.”

“The Philippine Embassy and Consulates General in the United States appreciate the swift action taken by a number of local authorities to apprehend perpetrators of these attacks. However, we call on federal, state, and local authorities to further ensure the protection of persons of Asian descent, including Filipinos,” the Philippine Department of Foreign Affairs said in a separate statement.