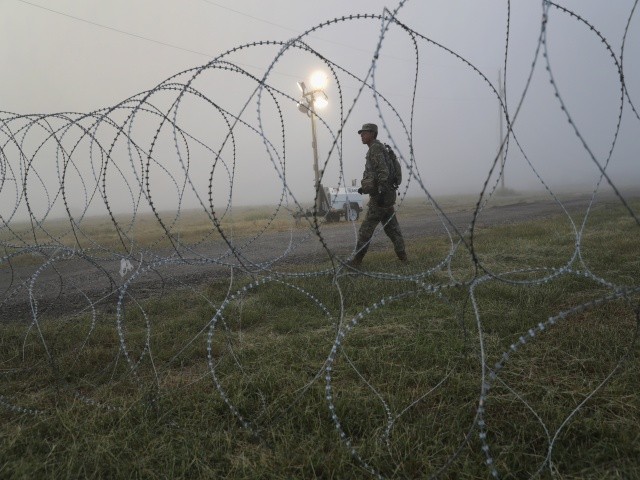 Less than 20 miles of the nearly 2,000-mile United States-Mexico border has been reinforced with razor wire as a caravan of 7,000 to 10,000 Central Americans heads to the U.S.

As Breitbart News has reported, tensions have risen just over the southern border in Tijuana, Mexico where about 2,000 migrants with the caravan are staying and where locals are protesting their arrival into the city.

President Trump is touting that the border is being secured ahead of the caravan’s arrival — though record levels of illegal border-crossers attempt to cross every day —  with the help of the U.S. military and razor wire.

Department of Homeland Security (DHS) officials confirmed to Breitbart News that about 18.4 miles of the U.S.-Mexico border have been reinforced with the razor wire with plans to expand. DHS officials say there is no plan, though, to reinforce the entire southern border with the razor wire which was put up by military personnel after caravan migrants scaled the border fence in the region.

The Fake News is showing old footage of people climbing over our Ocean Area Fence. This is what it really looks like – no climbers anymore under our Administration! pic.twitter.com/CD4ltRePML

Trump’s assertion that there are no longer “climbers” in the region is contradicted by video footage released by the Customs and Border Patrol where illegal border-crossers can be seen knocking down the razor wiring that had been put on the border fence near Imperial Beach:

Footage from a #USBP thermal camera captures multiple men climbing the border barrier near Imperial Beach and destroying recently installed concertina wire. All seeking to enter the U.S. are urged to do so at one of more than 320 official U.S. Ports of Entry. #CBP #bordersecurity pic.twitter.com/1IoSjiFoBt

DHS officials say since the border-crossers knocked the razor wire down, additional wiring and reinforcement has been placed at the border.

The Trump administration has had to rely on troop deployment and the razor wire reinforcement as they have yet to secure border wall funding by the Republican-controlled Congress despite support for the wall from American voters in the recent midterm elections.

There have been reports that the troops stationed at the U.S.-Mexico border will soon return home as the caravan arrives at the southern border, but immigration experts say the border needs more law enforcement, not less to deal with the inflow of illegal immigration.

Kansas Secretary of State Kris Kobach wrote in a Breitbart News column that state and local police can be enlisted to assist U.S. Border Patrol agents at times of an invasion at the nation’s borders.