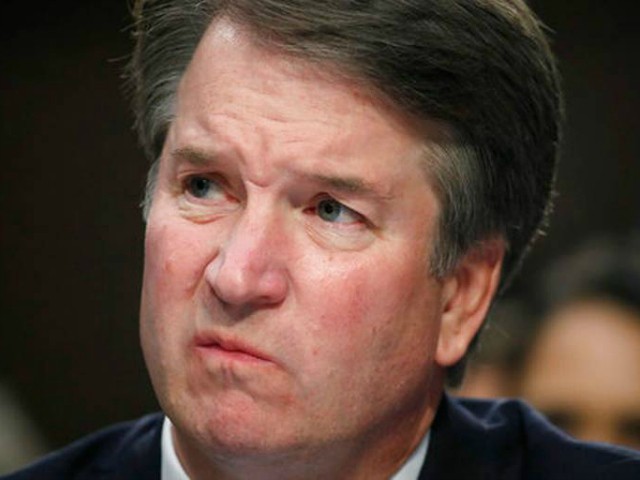 The word “survivor” was used 32 times by the conference’s featured speakers, according to C-SPAN’s automated transcription of the event. “Trauma” was said 23 times.

Roger Canaff, a former assistant district attorney in New York City, said a “reasonable doubt standard” is not needed to block the appointment of Kavanaugh to the Supreme Court:

We’re not dealing with a reasonable doubt standard, either. That’s really important. We don’t need to demonstrate this beyond a reasonable doubt. Judge Kavanaugh is not on trial. This is about whether or not he should have the privilege of serving in the highest court in the United States.

Canaff also said Americans must “start by believing” all women who make allegations of sexual assault against men:

Another thing that we believe in violence against women is to, what we call, “start by believing”: SBB. That doesn’t mean that we continue to believe despite any fact that might emerge. … When we begin by believing survivors, then we allow them to open up their minds. We allow their anxiety to go down, their self-esteem to go up. More facts come forward, we actually reduce bias, and we’re able to get to the truth a lot faster.

Henard warned against senators “perpetrating another level of violence” against Ford in the event of Ford’s testimony before a Senate committee:

If [Christine Blasey Ford] shows up on Monday … [senators] are going to be perpetrating another level of violence because it’s not going to be a trauma-informed process.

Lisalyn Jacobs, an attorney, described Ford’s claims as “serious and credible charges of sexual violence.” She added that “time has vindicated [Anita Hill].” She continued:

Kiersten Stewart, a director at Futures Without Violence, called on America’s men to “believe women”:

To the men controlling this process: This is your test, as well. Do you respect women, or don’t you? If you do, as you say, then you need to show it with your actions, now, when it matters.

To the men out there: Now is your moment to take a stand. You know sexual violence is wrong. Most of you would never do it and hate is as much as we do. Speak out. Believe women. Use your power. Use your voice. Speak up for a fair process.

Toni Van Pelt, president of National Organization for Women (NOW), noted the race and sex of Republican senators on the Senate Judiciary Committee:

Only Chuck Grassley and Orrin Hatch still remain on the Senate Judiciary Committee that unfairly interrogated Anita Hill with malice and spitefulness. Today, all 11 white men on the Republican side of the dais seem intent on creating their own Anita Hill with Dr. Ford their new target.

NOW calls on the Judiciary Committee to delay these hearings and to open them to witnesses who may wish to confirm Dr. Ford’s account. … Dr. Ford made a brave decision to come forward.

“Clearly, she is not lying,” added Pelt in reference to Ford.

Some women attending the events held signs with the following messages: “#CancelKavanaugh,” “I stand with Dr. Christine Blasey Ford,” and “#IBelieveChristine.”