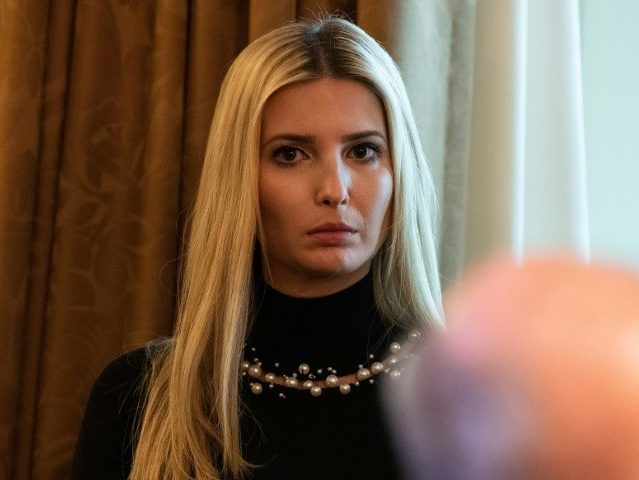 A Washington, DC, art gallery has put on a “feminist” art exhibit featuring a model resembling Ivanka Trump vacuuming crumbs off the floor sporting a smile, encouraging visitors to toss crumbs onto a pink carpet for her to clean up.

The art exhibit “Ivanka Vacuuming,” created by Jennifer Rubell, features the Ivanka lookalike wearing a pink dress and yellow stilettos pushing a vacuum next to a giant pile of bread crumbs on display at the Flashpoint Gallery in D.C., according to a press release for the exhibit from CulturalDC.

“Inspired by a figure whose public persona incorporates an almost comically wide range of feminine identities—daughter, wife, mother, sister, model, working woman, blonde— ‘Ivanka Vacuuming’ is simultaneously a visual celebration of a contemporary feminine icon; a portrait of our own relationship to that figure; and a questioning of our complicity in her role-playing,” the release for the exhibit states.

But unlike most art exhibits, this piece of artwork has an interactive component.

Guests who walk into the Flashpoint Gallery, which is displaying the exhibit between February 1-17, are encouraged to toss bread crumbs at the Ivanka model as she repeatedly vacuums the crumbs off the carpet without complaints.

Admission to the exhibit is free, and those who cannot view it in person are invited to view it via a livestream between 6-8 p.m. anytime between February 1-17.

Although the release billed the performance art display a celebration of feminism, Rubell’s interpretation of her work was slightly different.

The New York-based artist said she enjoyed her “complicated” relationship with her work partially because she takes pleasure out of throwing the crumbs to mock President Trump’s daughter.

“Here is what’s complicated: we enjoy throwing the crumbs for Ivanka to vacuum,” Rubell said in a statement. “That is the icky truth at the center of the work. It’s funny, it’s pleasurable, it makes us feel powerful, and we want to do it more.”

“We like having the power to elicit a specific and certain response,” she added. “Also, we know she’ll keep vacuuming whether we do it or not, so it’s not really our fault, right?”

Ivanka Trump responded to the performance art display mocking her in a Tuesday morning tweet, choosing to stay above the fray:

Women can choose to knock each other down or build each other up. I choose the latter. https://t.co/MFri4xKhNI

But Eric Trump was less reserved in his criticism of the exhibit, calling out the people behind the exhibit for objectifying women and praising his sister as a “powerful woman who has done more for women” than anyone in D.C.

“These leftists called up a modeling agency saying, ‘You know what, I want to get a nice women to come stand on a carpet,’” the first son told Fox & Friends Tuesday morning. “So our people, with a vacuum of all things, so our people can throw food and crumbs to mimic a powerful woman who has done more for women than probably anyone in Washington, D.C.”