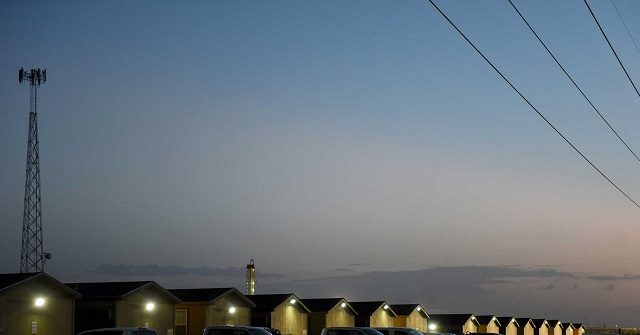 Reports from local news outlets in Midland, Texas, reveal busloads of migrant children being moved under the cover of darkness into a local holding facility. State and local officials received little or no advance notice of the federal government’s plans to move these migrant children into their community.

“On Sunday, Governor Greg Abbott announced that the federal government planned to move some children from the border to a holding facility in Midland,” CBS 7’s Joshua Skinner reported. “The migrants arrived in buses overnight.”

Breitbart Texas spoke to officials operating under the umbrella of U.S. Customs and Border Protection on Monday regarding the movement of the unaccompanied migrants who had been apprehended by Border Patrol agents after illegally crossing the Rio Grande.

The source with knowledge of the movement–but is not authorized to speak on the matter–told Breitbart the Department of Health and Human Services (HHS) officials opened a new facility in Midland at what they described as an abandoned oil worker or “mancamp.” NewsWest9 identified the facility as the “Cotton Logistics Midland Mancamp.”

HHS officials are also reportedly eyeing locations in Dallas that could include the Dallas Convention Center.

Responding to an inquiry from Breitbart Texas, HHS officials responded:

As a result of the compelling need to minimize [unaccompanied children] presence at CBP facilities and to provide a much more suitable environment and improved conditions at [Office of Refugee Resettlement] facilities relative to CBP facilities, HHS’ Office of Refugee Resettlement (ORR) is opening an Emergency Intake Site in Midland, Texas on Sunday, March 14, 2021. The site in Midland, Texas offers hard-sided shelter space for the children.

The immediate need for the Emergency Intake Site is the result of the rapid increase in the pace of referrals of UC from DHS to ORR for care. The site will provide a safer and less over-crowded environment where children are cared for and processed as quickly as possible and either released to a sponsor or transferred to an ORR shelter for longer-term care.  The Emergency Intake Site is intended for use as a temporary measure.

The Emergency Intake Site will provide required standards of care for children such as providing clean and comfortable sleeping quarters, meals, toiletries, laundry, and access to medical services. A COVID-19 health screening protocol for all children will be implemented to follow CDC guidelines for preventing and controlling communicable diseases. Services will be provided by a combination of the American Red Cross, contractors, and federal staff – including teams from the HHS Office of the Assistant Secretary for Preparedness and Response and the US Public Health Service Commissioned Corps.

CBS7 reports the new shelter is located near FM 1788 and County Road 150 in Midland County.

Breitbart Texas reached out to the Office of the Texas Governor for information about the operation that led to moving the children into the facility during overnight hours. An official said the Biden Administration is not forthcoming with information regarding the border crisis and the movement of these migrant children. Abbott received information about the plans late on Saturday night.

On Sunday, Governor Greg Abbott told Fox News, “We got surprise news, at 9:30 last night,  from the federal HHS that they’re going to be sending some of these migrants to a holding facility in Midland.”

“If they’re going to be working with us, the governor of the State of Texas has to know what they’re doing,” Abbott continued. “How many of those people are going? Where are they going after that? What kind of COVID protocols are they using?”

Midland County Sheriff David Criner told the local CBS affiliate they are “closely monitoring the situation and the holding facility in Midland County for the safety and security of our citizens.”

HHS officials said they will continue to utilize “all available options to care for the children referred to us safely.” Some of the options include short-term and long-term solutions.

“In the short-term, we can ensure children do not spend more time in border patrol facilities than necessary by looking at all opportunities to increase our permanent/licensed network and use influx facilities when additional space is immediately needed,” HHS stated.
Additional shelter capacity will minimize the likelihood that children remain in Border Patrol stations longer than necessary and enhance child welfare for the vulnerable population of unaccompanied children.

HHS officials did not confirm or deny specific plans to utilize facilities in Dallas. Breitbart reached out to Dallas County and City of Dallas officials regarding any plans they may have to work with HHS officials to provide shelter space. An immediate response was not available.

The Associated Press reports a notification to Dallas City Council members reports the Dallas Convention Center will be used for up to 90 days beginning this week to house 15-17-year-old unaccompanied migrant children. Dallas officials described the site as a “decompression center.”

Randy Clark is a 32-year veteran of the United States Border Patrol.  Prior to his retirement, he served as the Division Chief for Law Enforcement Operations, directing operations for nine Border Patrol Stations within the Del Rio, Texas Sector.